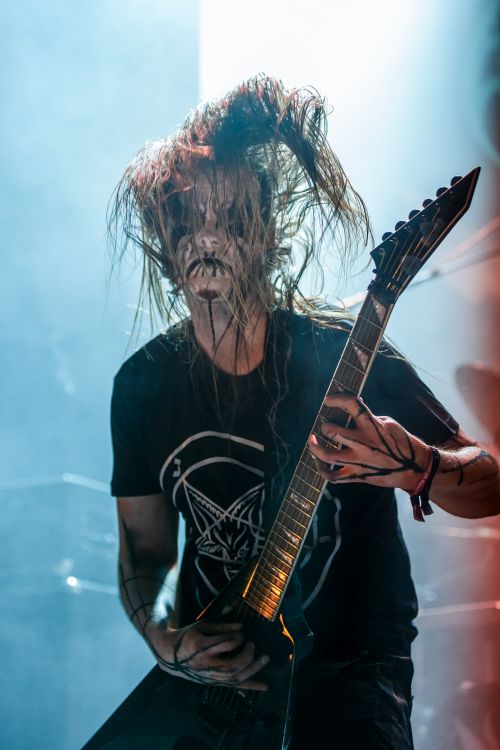 ODIUM live@Inferno Festival
photo by Stig Pallesen/StiPa photography
Inferno started off for me with the IMC conference – about which you can read here. Then for the first day,  I was of course early at the venue because I was really looking forward to see Odium. I really like the 90’s and especially many bands that belong to the label Nocturnal Art. The NAP sound is a particular technical cold sound that it’s connected to Emperor. These bands I like from that label do not play often if ever, unfortunately. You have awesome stuff in there like Odium, of course,  Limbonic Art, The Wretched End, Red Harvest, Sirius (which is prob my fav band from Portugal, but they sound pretty norwegian, pretty NAP and are worth their endorsement) I was pretty glad to find that Odium was the same awesome Myrkskog line-up. So having Dominator (ex-Dark Funeral) on drums and Destructhor (ex-Morbid Angel) and Gortheon that concert was as perfect as you could expect. Awesome to start with some cosmic melo BM!

After Odium then I got to see the Erimha guys performing. It is always really cool to see foreign bands since they have that extra energy! That one concert means so much to them and it shows actually. I think they played a lot of songs from Thesis ov Warfare. The symphonic elements were not there as much as I expected as far as I remember and I actually thought that Erimha live are a band that even the most puritan DM fans could appreciate!

SHINING live@Inferno Festival
photo by Stig Pallesen/StiPa photography
I missed Naglfar for some reason, but I was there in time to see Shining. I really liked the fact they played a couple of new songs from their latest release. I find it to be musically pretty elegant actually with all the jazzy undertones and the rhythm it’s awesome. I actually wrote a  review  of that album. Even though I think they had some technical problems it was a pretty enjoyable show, nonetheless. Besides they do have a particular style on their own both musically and live so it’s something different altogether.

Then I ended up on the third floor when Dark Funeral started playing. I’m pretty fond of their old stuff. The songs are pretty catchy. What with the lyrics of all kinds of infernal beings and witches flying! It is something enjoyable everytime. I really like Vobiscum Sathanas, the vocals there especially, and of course the pretty pop Open The Gates which I had still in my head when I woke up the next day. There were a couple of the “softer” newer songs as well that I equally enjoy even though they are some sort of ballads written for men. The closest we come to “romantic” in this genre. Dark Funeral do deliver everytime! Of course it wasn’t a perfect show because it’s a huge pity that Dominator was there on the 3rd floor as well rather than playing!

DARK FUNERAL live@Inferno Festival
photo by Stig Pallesen/StiPa photography
Dodecahedrom from The Netherlands was a pretty remarkable experience. This is a band that I have a hard time getting into while listening at home. So my expectations were not that high when I went to see them. But quickly every negativism was dispelled as they started playing and their concert became one of the best out of the whole festival to my own surprise. I was just getting that bass sound right through my fibres. It was powerful! It gives the band a lot of substance. Plus you get all the distortions and the amazing atmosphere they create. Back at home, I tried to listen again but my body just refuses to cooperate and I’m at odds with myself for it. I’ll give it more attempts because the experience live was amazing. Everyone needs to experience that!!

One Tail One Head from Trondheim not only had the coolest girlie in the whole festival! (It’s pretty rare I get the feeling I must have this t-shirt nmw out of metal merch.) I got compliments from other girls tho, so yeah finally something wearable! Besides that they gave an awesome show since they are prob one of the best BM bands from Trøndelag. They are a part of the Nidrosian BM from Terratur Possessions. There are lots of good bands there. And I read Fenriz really like the Nidrosian brand somewhere. I had seen them in Trondheim in a smaller venue and with less people and then I could appreciate the music better than at the packed venue in Oslo. They play the kind of Black Thrash that I find really enjoyable. Lots of old school. I wish they could have played in the main stage. But well they are not that prolific when it comes to releasing new stuff. They have released a single called Firebirds b/w Prowess. I really hope they are working on a full length. I will see them again in Stockholm soon at the much maligned Stockholm Slaughter, something I’m really looking forward to.

I skipped UADA altogether because I saw them in Germany and I did not find it particularly entertaining then. But I heard many really liked it, so I guess I’ll give it another chance later. But well I needed to save some energy because Obituary is one of those bands you can headbang a lot to. But I must confess that it is not Obituary the first band I go to when I’m in the Florida DM mood. I do prefer Cannibal Corpse, Malevolent Creation and above all Hate Eternal. But this doesn’t mean I can’t appreciate them live. So don’t get me wrong Obituary live was absolutely awesome. They give you this real metal sound. The kinda feeling that is harder and harder to come by nowadays. The same vibes you get in a Slayer or Carcass concert. So everyone after the concert, including myself, loved it.

RICK PARFITT – Over and Out