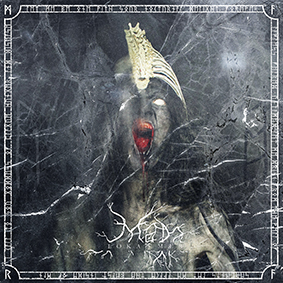 The Swedish quartet known as Mara is one of the more intriguing and noteworthy acts to be found in today’s black metal scene, and these purveyors of blistering darkness are about to unleash a 6-track album that blends precision, atmosphere, and majestic melodies to great effect.

The somewhat ritualistic and ominous album opener “Myrkriða” immediately introduces an aura that is as darkly alluring as it is hypnotic. What follows are five ravenous and bone-chilling tunes where awe-inspiring melodies and caustic riffs weave together a thick tapestry of sound that conjures images of pagan rites of old as well as chaotic dimensions far beyond the grasp of man. The impassioned vocals have an incendiary individuality to them and underline the constant feel of yearning that simmers with subtle seduction underneath each note. Despite the sinister feel of the record, several parts of it possess a rather beautiful and dramatic subtext, and the album’s crowning achievement, namely the piece entitled “Wolf”, is a great example of that. The production is rough and organic yet properly mixed with respect to achieving a good balance between the various instruments and sounding absolutely crushing. I do think that the drums could have been a little punchier in a few places, but this is hardly a major issue and certainly nothing to become overly upset about. The fat, rumbling bass tone is gorgeous, and the way in which it complements the guitars is outstanding. Mara occasionally incorporate elements that add an unhinged and destructive vibe to the affair. It could be something as simple as a guitar solo, but whenever they do something along these lines it simply works and adds an interesting touch to the compositions.

With “Loka Mær”, Mara have struck upon something unique, and I find the whole endeavor pretty exhilarating. A deeply passionate and overwhelmingly evocative black metal gem whose 26 raging minutes somehow manage to embody nearly everything that I love about the genre.