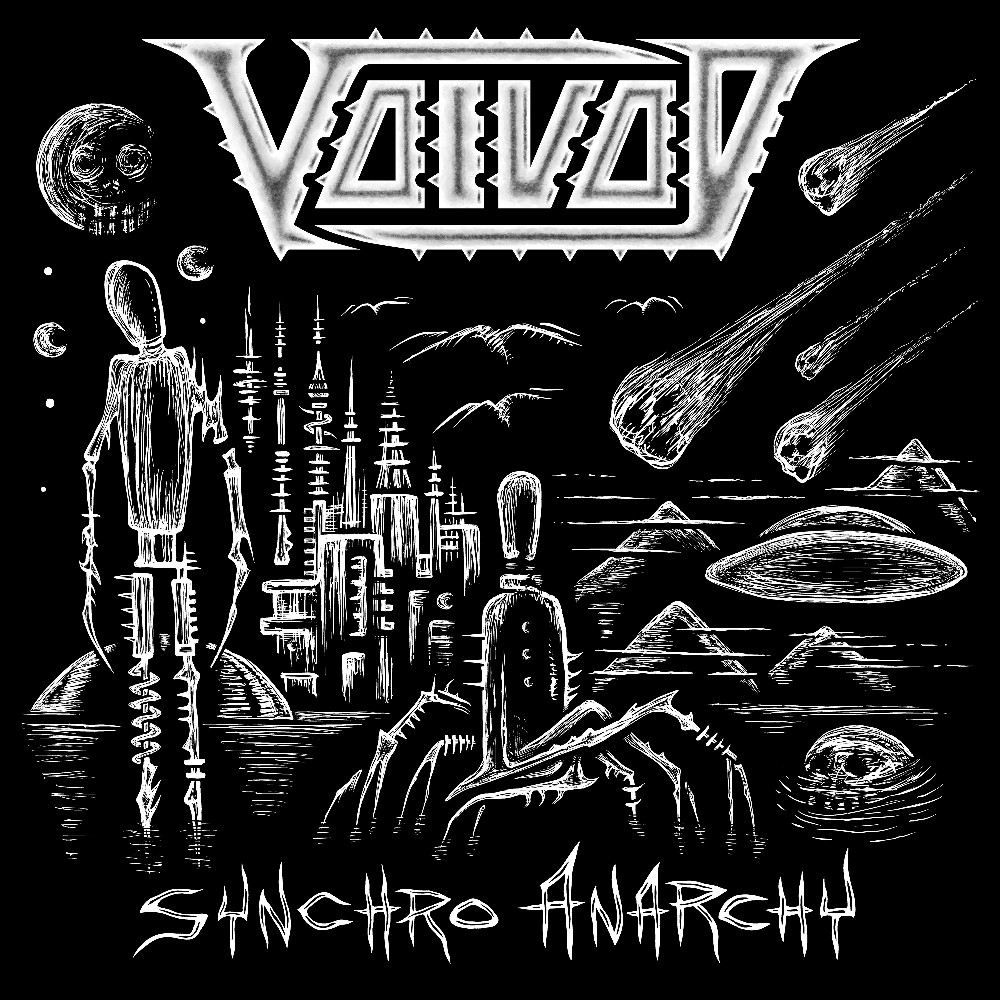 Voivod is considered one of the most influential bands in extreme metal, inspirational to countless thrash, death and even black metal bands. Their highly technical dissonant riffing, patented on 13 full lengths throughout over 40 years of existence, can be heard in the works of bands as diverse as Gorguts, Mastodon, Deceased, Megadeth, Ulcerate, Deathspell Omega, Immolation, Behemoth and Martyr (Canada), to name just a few and the most obvious to these ears, yet, besides “Negatron”¹⁹⁹⁵ and, especially, “Phobos”¹⁹⁹⁷, and now, this here “Synchro Anarchy”, they remain practically unknown to me despite the fact that the Flotsam And Jetsam founder and the former Metallica bassist, Jason Curtis “Jasonic” Newsted, was once a part of the lineup (2001-2008). For some reason, most of their catalogue, especially the post “Phobos” era, eluded me, but something about this new album first single, the opener “Paranormalium” made me reach for the promo and, I have to admit, it was a great decision because “Synchro Anarchy”, while not without flaws, is a worthy edition to Voivod’s discography as well as a very good technical progressive thrash album in its own right.

It seems Voivod, who today consists of Denis “Snake” Bélanger (vocals), Daniel “Chewy” Mongrain (guitars), Dominique “Rocky” Laroche and Michel “Away” Langevin (drums, logo, artwork), did not spend a whole lot of time choosing the songs for video singles but just picked the first three: “Paranormalium”, the title track and “Planet Eaters” in order of appearance on the album. While the first two choices were certainly very good, since no tracks deserve less than 5/6 score, “Planet Eaters” is where they really hit their creative stride, as Megadethly “Rust In Peace” riffing alternates with early Gojiran vibe, but that’s still before my favorite, and the only perfect track, “Mind Clock” which reeks of Anthrax’s very underrated “Persistence Of Time” early Sadist and even Mercyful Fate with a fantastic sense of balance and melody bringing the latter God Forbid to mind. Of course, it goes without saying that there can be no talk of emulation here, rather, Voivod is reclaiming their own stylings all the aforementioned have borrowed. “Holographic Thinking” is another standout, now early Machine Head, now Mastodon and even 90s Prong, as are the two fantastic closers: “Quest For Nothing” and “Memory Failure”, the former strongly recalling “Phobos” days and the closer combining Canadian Martyr, Biohazard riffs with Snake’s vocals now Tommy Victor (Prong) now Axl Rose (Guns’N’Roses), but, overall, a fresh take on “how to make insightful progressive thrash in the XXI-st Centtury that still sounds as fresh and original after over 4 decades of existence.

Flaws? Only songwriting, as sometimes the experimentation, the progression and the ebbs and flows could have been deeper and braver, especially on the first half where tracks seem a little samey if rather far from formulaic. Or, perhaps, they’re great but I didn’t find them as catchy and riveting as the aforementioned standouts?

In any case, “Synchro Anarchy” is definitely one for the history books, to borrow our reviewer’s J.N.’s catchphrase. Frankly, it boggles the mind that a band as old as Metallica can still churn out such fresh, heavy, catchy and relevant material seemingly effortlessly while their peers consistently serve microwaved versions of their former selves. I will definitely pay more attention to these guys for future endeavors.