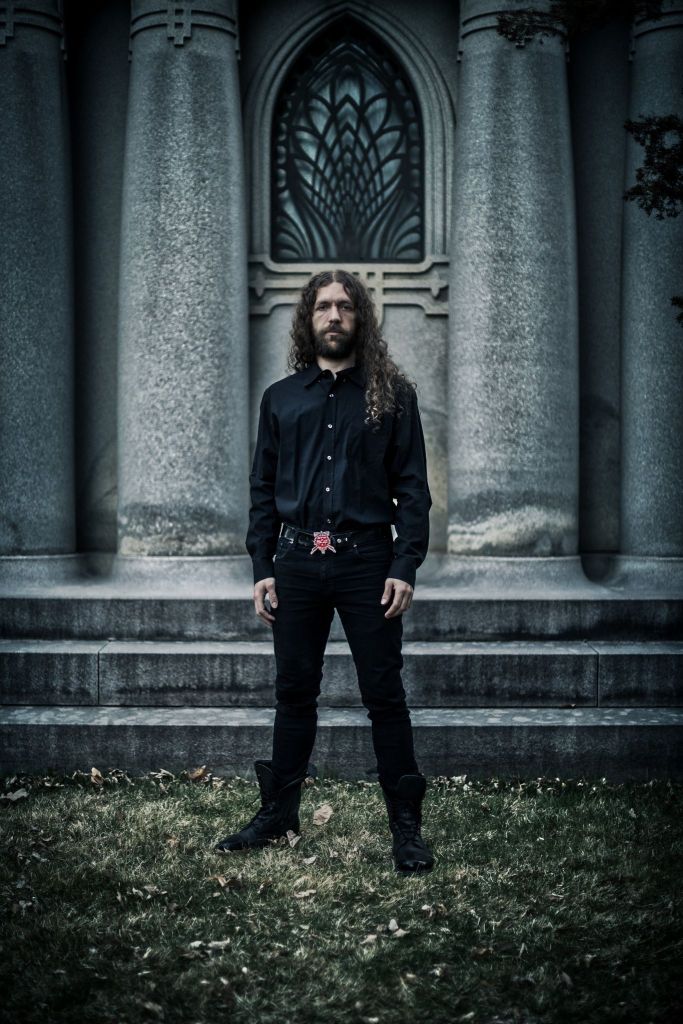 Several years ago I went around thinking that the Black Metal mystique of the old days was almost extinct. There have been many failed attempts to recreate it specially by means of image. Pretty few get to actually infuse it into the music. But then I got to listen to Akhlys’ album The Dreaming I. I still remember the powerful effect that the first listen gave me. It was like none other album that year. It’s cold eerie ambience brings the best of First Wave Black Metal to mind in a pretty dreadful and convincing way. It has also a pretty dense hypnotic nature that I really like. So this year upon hearing something new was going to come out I was full of expectations. Melinoë, their latest album not only has all the elements that make Akhlys so special but the technicality has been raised even further to my delight.

So naturally I had to interview Akhlys’ drummer Eoghan. He is a well-established musician in the Colorado scene. Actually I became familiar with his name back in 2018 when I was visiting the US and received a copy of an album from his former band Sar Isatum. Then he joined Akhlys later that year and created Aoratos. I’m a fan of all of his devilish endeavors both as a guitarist and a drummer. So this interview is about a little bit of everything he is currently doing that I find pretty interesting.

When did you start playing drums?
I started playing in 2007. Guitar is my first instrument so at the time I was just playing around on my band member’s drum kit and also in my high school’s jazz band. My serious playing started in 2012 when I joined Pile of Priests full time and bought my own drum kit.

Which drummers have been your inspiration when it comes to drumming?
I was big into thrash when I first started playing so I was really inspired by drummers like Michel "Away" Langevin, Igor Cavalera, Kelly David Smith, Sid Falck, Dave Lombardo, Charlie Benante just to name a few. Now I have really grown into a wider range of style but have dove deep into black metal drumming thanks to drummers like Nick Barker, Hellhammer, Darkside, Dominator, Marthyn, Trym Torson, etc etc, I can go forever with this list so one last honorable mention to Tomas Haake of Meshuggah.

How did you learn to play drums?
I am 100% self taught on drums purely by listening to music. In recent years I have taken online self study drum courses and have implemented strict practice systems.

Which are your favorite drumming techniques and why?
My main favorites are speed drumming, i.e., blast beats, double bass, fast fills.These are my favorites because of the intense wall of sound effects. I also love progressive odd times and dynamics because of the musical freedom and oddities that can be created.

Tell us about your gear…
I play an 8 piece double bass Pearl Export kit with a Tama SLP steel snare. My cymbals are Paiste RUDE 14" hi-hat, 18" and 20" crashes with a 22" ride on the left aux side and 22" Reign ride on my main side. I also have 1 Meinl 20" Byzance dark dry china and a Zildian Z custom 16" crash. My pedals are Pearl Demon Direct Drives with OnTrigger’s through a Roland TM2 module. My sticks are Vic Firth 2B nylon tips. With all our electronics, I run our backing and click tracks through a Focusrite Scarlet 2i2 interface with Ableton Live on my MSI laptop. With all this we run into our Galaxy In-Ear monitor system.

You play other instruments, how much time do you use to practice other instruments?
Yes indeed, I have actually been mainly a guitarist for the majority of how long I’ve been playing music. Ultimately how much practice time I have is based on what time I make for it, so with a full time job and drum/band practice schedule I can honestly make time for guitar a couple hours a day.

I think Akhlys’ sound is pretty unique. How would you describe the experience of playing in this band compared to previous bands
Playing in Akhlys is absolutely great and I have had the fastest growth from playing with them. It is by far the most intense band I have been in musically and also the most professional.

How has been the feedback from the press and audience when it comes to Akhlys’ new album Melinoë?
It’s been absolutely great. We are getting a ton of positive feedback all over the internet.

You have another interesting band called Aoratos, can you describe its sound? Are you currently writing more music?
Yes Aoratos is another brainchild of Naas Alcameth. It is also crushing black metal but it is drawing more on the energies of darker inhabitants within more subtle and seemingly abandoned realms. So far my role has just been similar in Akhlys, performing the previous album live and also working towards new material. We have a few new songs in the works but we are mainly focused on Akhlys for now.

What is it that you can’t do in your other bands thats made you create Aoratos? What were you aiming at with this band when it comes to the music?
Aoratos was formed before I joined in so I would have to defer a question like that to the creator himself. As far as the new music we are doing, my personal aim if just to bring the intensity on drums and put my personal touch to it to hopefully help evolve from the last record.

You played guitars with Sar Isatum, why did you leave?
Yes I did. It was a great project and I really enjoyed the material we produced. It was simply just hard to keep a steady lineup and ultimately I just had to shed some of the work load I was bringing on myself by having too many projects at once.

Tell us more about the latest Sar Isatum album. When is it going to be released? And what can we expect from it?
Unfortunately there will be no new Sar Isatum record as we decided to dissolve the project. All of the members from S.I. are pursuing other great projects so at least we all have those to look forward to.

I was looking forward to see Akhlys in Europe. What will happen with that tour?
As far as we know, we were able to tentatively re-book the dates we had planned for 2020 in 2021 instead. Obviously based on the current global situation we have to be pretty loose with any expectations. What I do know is that when the world is fully open to concerts and touring, Akhlys have an immense amount of opportunities that will be revealed when it is all more concrete.

Tell me about the Colorado metal scene, which bands would you recommend us?
The Colorado scene is pretty interesting. It is hard to pinpoint any sort of cohesive genre focus with any of the bands, everyone is pretty original in their own right. Some of my favorite locals are Satan’s Host, Helleborus, Augur, Noctambulist, Belhor, Crafteon, Viperwitch, just to name a few off the top of my head. I will also shout out my other projects Suns of Sorath, Amdusias, and Pile of Priests,

Do you have any non-metal influences that have shaped you as a musician?
Yes actually I have a strong background in classical and jazz so this has been a huge influence on my guitar playing in particular. Drawing from those genres I have been able to internalize high level music theory. Beyond that I enjoy punk, 80’s new wave, pop, and grunge which I believe have definitely influenced me on a subconcious level.

I AM PARIAH – Interview