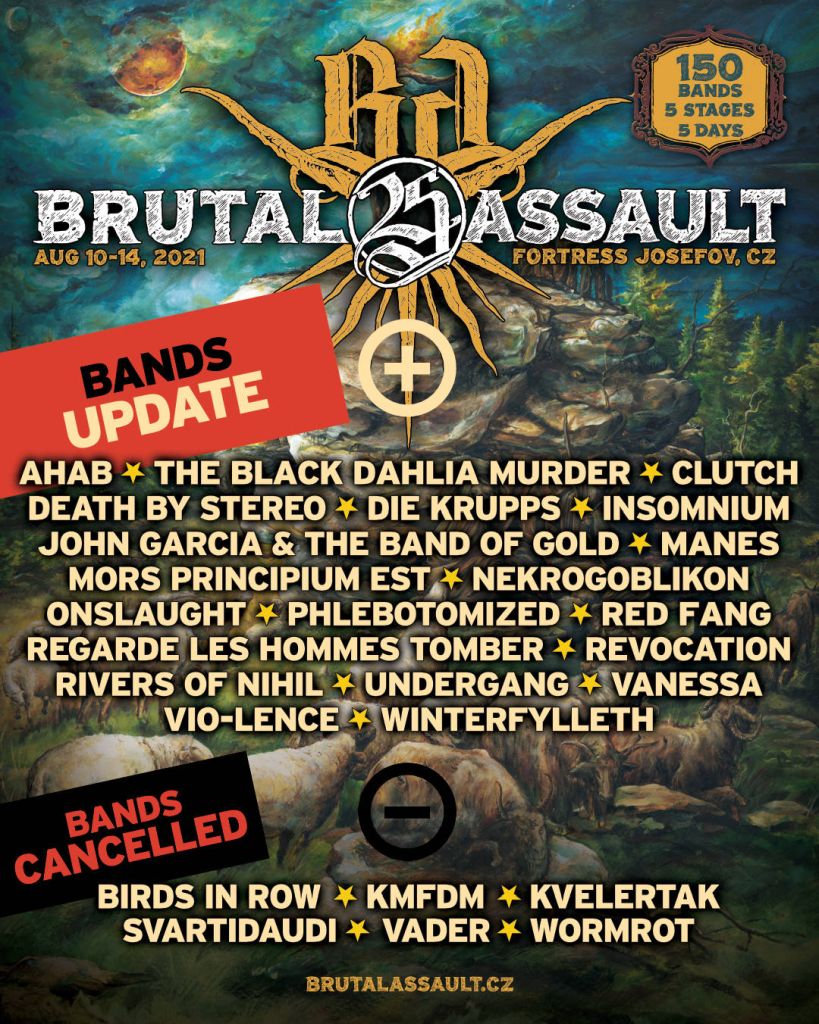 This crazy year already wrapped, we are more than thrilled to announce a new batch of bands confirmed for the upcoming BA 2021! We are adding more than 20 bands to the line-up covering a whole spectrum of genres, without forgetting any essentials!

If any of you orthodox metalheads do not have a ticket yet, do not waste any more time as we have confirmed a thrash legend from the Bay Area, the forerunner of Machine Head – yes, Phil Demmel will bring the re-united VIO-LENCE! By the time of the festival their new EP should be out, so you can be looking forward to some new stuff! The thrash unit of our line-up is further joined by British ONSLAUGHT, who are taking the genre to a next level of brutality with their new album "Generation Antichrist" and technical deatthrashers REVOCATION, who are extremely cleverly oscillating between the 80’s tradition and more technical modern!

Brutal Assault’s line-up is not just about destructive power. Regardless of the genre, everybody just wanna have fun and the trio of stoner rock bands, who will take over our stages, will undoubtedly make the beer flow. Get ready for a huge moshpit at the popular jokers RED FANG as well as at the vital heavy rockers CLUTCH. The third to rock the stage is JOHN GARCIA and his The Band of Gold, the owner of the unforgettable voice of the legendary Kyuss!

Now let’s add up a bit of death metal. Its melodic and atmospheric offshoot will be represented twice by Finland: INSOMNIUM and MORS PRINCIPIUM EST! The faster and more progressive position is taken by Americans – Trevor Strnad with his melodic THE BLACK DAHLIA MURDER, striking progressives RIVERS OF NIHIL and NEKROGOBLIKON with their crazy little green goblin. And on top of all of these we can’t forget the Danish quartet adoring a shamelessly rotten sound – UNDERGANG! Ugh! Our list wouldn’t be complete without a dash of experimental. The pioneers of industrial / electro rock DIE KRUPPS surely do not need a further introduction. However, we are also adding the pioneers of the Czech EBM – the masters of provocation, messengers of evil and kings of Czech hard electronics VANESSA! You can also look forward to the Norwegian MANES, whose unique mix of rock, electronic genres and heavy guitars has no borders whatsoever. No less interesting will be the reunited death/doom PHLEBOTOMIZED from the Netherlands.

Hardcore punk hybrid from Northern California, balancing consciousness with total chaos and elements of metal ferocity, will be brought to you by DEATH BY STEREO!

We are nearly finished. But have no worries, black and doom metal is not to be forgotten! Melancholy from Germany will get over you with funeral doom AHAB and their murmur as deep as the Marian Trench. Furthermore, and epic mixture of atmospheric black metal with sludge / post-hardcore will be spread acroos the fortress by REGARDE LES HOMMES TOMBER. The atmospheric wave will also come across with English WINTERFYLLET, whose black metal uncovers doom and pagan-folk sceneries.

Brutal Assault 2021 will take place in five monstrous days on August 10-14. 2021. As for now, ⅔ of the festival’s line up of 150 performers are confirmed, so there are more names to be added still! If you’d like to support us, get your ticket as soon as possible. We are looking forward to all of you!