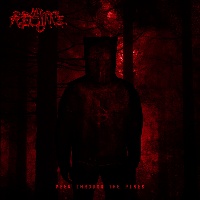 My Regime is a thrash metal project of Kayser vocalist/former Spiritual Beggars vocalist/bassist Christian "Spice" Sjöstrand and Kayser drummer Bob Ruben. Their debut album, "Dogma", was an impressive and promising slab of thrash metal in the vein of classic Slayer, Megadeth and some crossover of Suicidal Tendencies, and I remember reviewing it on a now defunct Imhotep.no online zine while giving it a fairly high score. I have completely missed the follow up, "Deranged Patterns", and only now I am catching up with this here "Peek Through The Pines", so I can only compare it to the debut. Findings?

When comparing with the debut, "Peek Through The Pines" shines as a much more mature effort. Generally, if you like albums such as Megadeth "Countdown To Extinction" (big time!), Slayer’s "Reign In Blood" through "Seasons In The Abyss" (and who doesn’t?) as well as Testament’s "Practice What You Preach" and Anthrax’s "Sound Of The White Noise" with a little Tool’s "Undertow" for good measure, chances are you’ll find "Peek Through The Pines" to your liking. Spice is a very skillfull songwriter and instrumentalist and his duels with Marvin Kairenius rival even Dave Mustaine/Marty Friedman from the classic Megadeth lineup, just listen to the opening title track or the favorite "Too Many Faces" structurally heavily recalling Megadeth’s "Symphony Of Destruction" or the High On Fire/Pantera versed/90s Megadeth chorused "Black Rivers" where Spice is Matt Pike but the solo is deliciously "Youthanasia". How about the progressive Slayer intro’d masterpiece "You Don’t Understand" where Spice channels his inner Maynard Keenan not unlike the latter did on the Tool’s classic "Sober", with an obligatory Anthrax ’93 solo? And the more melodic heavy metal pieces are the preparation for some of the most ferocious thrashterpieces since "Reign In Blood", namely the Slayer-ic/Anthrax-ian "Deceit" (Spice vocally both Tom Araya and Dave Mustaine) that becomes a prelude to the magnifiscent progressive thrash metal closer "Unglue My Soul", part Anthrax "Potter’s Field" part Black Sabbath’s "Dehumanizer" (complete with Spice’s Ronnie James Dio-like vocals), which at 4:16 quotes Machine Head’s "Blood For Blood" and at 7:26 Slayer’s "Raining Blood" so that you half-expect the famous rain sample to cut through the fading riffs.

As for flaws, some songs, such as the Testament-ian "A New Moon" or the opening title track may seem too simple and stripped down when compared to the aforementioned gems, but hey, that’s one of the traits that made me think "Countdown To Extinction", itself shy of perfection of "Rust In Peace" in this regard.

Any way you slice it, Spice can thrash-dice it with the best of them, and adorn it with a powerful while razor-sharp production that allows Alexander Sekulovski bass lines (Underneath My Skin) and Ruben’s insane drumwork (Deceit, Unglue My Soul) to shine forth like a beacon of the genre. I’m happy to report that "Peek Through The Pines" is a near perfect progressive thrash metal album and My Regime is becoming a force to be reckoned with.