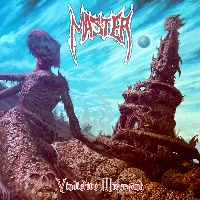 I have but a passing familiarity with this veteran death/thrash outfit, formed as long ago as 1983 (that’s as old as Megadeth!) out of the ashes of War Cry which played a mix of Motorhead, Venom and Slayer. Out of the total 14 albums in their discography I have only heard this one and "Faith Is In Season" (1998), which I could have sworn had a different cover then (either that or I got them confused with Deicide). Back then, the band did not impress me much, as I thought them to be a run-off-the-mill "let’s keep the spirit of old Slayer and thrash Sepultura alive" kind with little identity of their own. Now, 20 years later, have things changed with "Vindictive Miscreant"?

No, things have not changed much for Master, except that they do seem to have a much better sound, that is to say, production slays. Some may find that to be great news and smile with glee at the antiquated Obituary-ish Slayer-ic Motorhead with up to 3 riffs per song, and Paul Speckmann’s John Tardy/old Chuck Schuldiner "I’m having my throat slit whilst trying to profusely puke as I slowly simultaneously exsanguinate for 44:27 minutes" vocal delivery, but when the opening title track and "Actions Speak Louder Than Words" allow you to make a precise prediction concerning "Replaced", Houston, we have a problem. "The Inner Strength Of The Demon", "The Book" and "Engulfed In Paranoia" are all attempts at much needed variation with some slower riffs and even some Deceased ’97 melody but when they speed up they are mostly riding on that old school punkish death metal Napalm did to Death on "Code Red" and all the Swedish old school metallers have emulated since. Arguably the best of the eight installments, "The Impossible Of Dreams" gets me nostalgic for the old Beneath The Remains/Arise Sepultura but, it, too, does not deviate much from that steady chugga chugga, whereas the closing "Stand Up And Be Counted" advises me to keep my thoughts to myself, addressing my relation to my mother in no gentelmanly fashion before the album concludes.

While worthy of a few spins and cetrainly very well produced (Speckmann’s very thick constant bass, for instance), "Vindictive Miscreant" is not much above the meat and potatoes old school death/thrash metal. If you’re a fan of that, you know where your CD store is, but for my money, especially on the 14th album and in the 35th year of band’s existence, I prefer something more versatile and deeper.