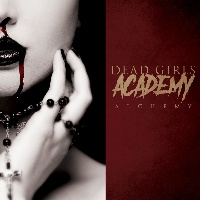 "Dead Girls Academy is Michael Orlando" informs "Alchemy" booklet. Yet there is no indication that the creator of the now defunct Vampires Everywhere! plays any instruments or does anything beside singing in his new creation, Dead Girls Academy.  In fact, there are two guitarist: Christian Thomson and Matti Hoffman, a bassist, Tyler Burgess, and a drummer, John Wilkes (Booth?), so perhaps Orlando does keyboards or plays tuba or shofar on "Alchemy"? On his bancamp page Orlando reveals that the songs were written by him, the producer Ronnie Radke (Falling In Reverse) and Elvis Baskette (Slash, Sevendust). But that adds to confusion: why would he BE the band? It’s simple: all the others are session musicians, hired for the purpose of the recording and sometimes live performances. This should not surprise us. Dave Mustaine of Megadeth did that for "The System Has Failed" and arguably Chuck Schuldiner did that throughout the whole existence of Death. Does Dead Girls Academy feel like a band and does, likewise, "Alchemy" sound like a band album?

Interestingly, "Alchemy" sounds very much like a band effort. The performances are tight as lamb’s testicles in the subzero degree winter, with Michael a versatile vocalist: now Matthew Tuck (Bullet For My Valentine) now Benjamin Burnley (Breaking Benjamin) then Chester Bennington. The production is powerful and heavy yet not overproduced, Ronnie Radke having done a fantastic job, and it allows for enjoyment of every detail, be it bass lines or synthesizer, drum roll or a guitar riff/melody or the excellent solos (Medicine, Everything, Too Late) Lyrically, again, according to band’s bandcamp, "Alchemy" is about conquering your inner demons – the voices in our heads pushing one way, with our hearts pushing the other, which Orlando calls "riding the line between right and wrong" and "may the bridges you burn light the way" (Medicine) In this way Michael wants to inspire hope based on the premise that "the cure to happiness is inside us" and to keep on fighting the daily struggles of life with that in mind. How honestly different from the usual "I hate/love my ex and I want to die but watch her die slowly first but I’d prefer if she came back" compelling lyricism of modern metalcorists! Plus, it must be emphasized, the goal was achieved without the excessive profanity typical to the genre. Does the music, though, match the lyrical design?

Indeed, the music of "Alchemy" does match the lyrical concept. To me the most interesting songs are those that deviate the most from the metalcore vein and seem to take more alternative skin, such as the space rock/metal of Devin Thousand-y "Conversations" (featuring Wilkes’ excellent drumwork) or the Killswitch Engage-sque closer "Far Away". If I were to pick a favorite, though, it would have to be, incidentally, those lyrically closest to home, such as the bassy, Nine Inch Nails-y "No Way Out", because "you can talk the talk but it doesn’t matter/it used to be fun but not anymore, so right now it’s more than I can’t afford", and for the infectious latter In Flames chorus, or the moving Breaking Benjamin-ic "I Can’t Feel A Thing", since that’s what hurts the most, "my heart shattered inside of me", or the Trivium-ish "Devil On My Shoulder" (with arguably the best chorus) where "your lips are sharp like razorblades/your eyes are dark as the night betrays/your heart is like a hand granade" and therefore "pull the pin you detonate", to mention just the ones that profoundly touched my very soul.

Not everything is fantastic, though. Although the album is surprisingly diverse, there’s some generic Asking Alexandria beating the living daylights out of Bullet For My Valentine (Too Late, I’ll Find A Way) or taps into the uninspired pool of latter All That Remains (Everything), and I’m not completely sold on the Nirvana-ic "Cannibal" where Michael vocally resurrects Kurt Kobain. Still, some others, such as the excellent opener "Medicine" or "Forever" may combine simple riffs that seem to rush toward the chorus but with the listener rewarded thereby.

There’s a lot to sink your ears into on "Alchemy". The ambitious atypical lyrical concept serves as basis for a very memorable and fun musical experience that found a special place in this heart as I hope it will in yours. I, for one, sure am glad I received this one as a CD promo.