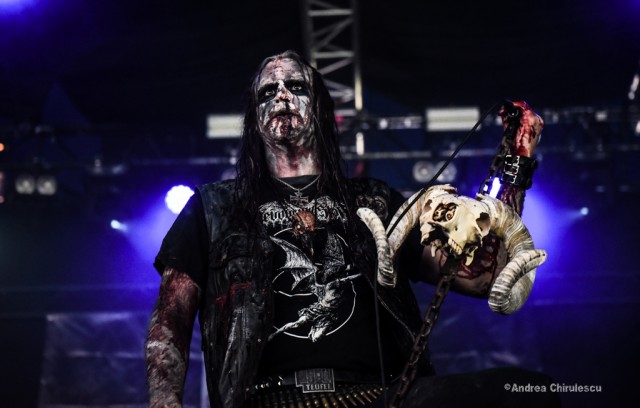 WHOREDOM RIFE live at Tons Of Rock 2018
Photo by Andrea Chirulescu
The band I was really looking forward to see the most was Whoredom Rife so that’s why I arrived early to not to miss it. It is absolutely what one looks for in Black Metal and that is so difficult to find these days. It’s absolute mastery of the genre with a pretty 90’s vibe. I was looking forward see any of the new song live as well as the album Nid- Hymner av Hat was released in November and as far as I can tell the band has allowed themselves to be even more technical this time around. I think they are representing pretty well what it has come to be the trønder BM sound. Nid-Hymner av Hat includes pretty interesting soundscapes and it’s one of those albums that needs lots of listening to catch the small details. Awesome guitars and drumming! Nid gives me the same enthralling BM trance inducing feeling of the likes of The Dreaming I from Akhlys which is a pretty special sound and I wish we had more of this kind of bands in this world, but there simply aren’t many at this level, which is a sad fact of life.

GAAHL’S WYRD live at Byscenen, Trondheim
Photo by Kris T. Therrian / 17 seconds photography
So it was then time for Gaahls Wyrd which is pretty much God Seed and Gorgoroth. But I’ve heard some new songs are on the making and will be released on 2019. It was awesome to see them perform Prosperity and Beauty which is one of the songs I like the most out of Ad Majorem Sathanas Gloriam. This is a pretty dark album and I enjoy it a lot on that account. I’m pretty glad Gaahl seemed to have retained some rights on this album so one gets these dark moments at times. I’m glad I also witnessed Sign of an Open Eye, Exit Through Carved Stones and Alt Liv among others.

All in all Gaahls Wyrd is a delight for Gorgoroth fans. I remember that once it was a thing to take one side in the Gorgoroth troubles, but I guess it doesn’t really matter much anymore anyways for fans or onlookers alike as it seems a thing of "the far dark past". I hope that everyone supports Gaahl’s project that will see the "unlight" in 2019. I’m looking forward to see what is going to become of it and I’m hoping for something evil or yeah it can be in God Seed’s vein and that will make it excellent. Whatever it is, we know it is going to be good unless it strays into something completely insane, so we will wait and see.

ENSLAVED live at Byscenen, Trondheim
Photo by Kris T. Therrian / 17 seconds photography
The night thus ended with Enslaved. My last Enslaved show was pretty magical with the whole of Frost being performed and fake snow against a totally cool backdrop that added a lot to the concert ambience. It was less magical in Oslo tho, but yeah the other concert in Bergen was special and it stays like a special memory. Some songs that were played in this tour were Vetrarnott, Isoders Dronning, Havenless and Jotun. There was also a pretty long song that sounded like more of their newer stuff. It had more psychedelic elements as far as I can recall, but I haven’t payed too much attention to the less Black Metal stuff, although I should, so I can’t say for sure which song it was. It sounds pretty modern and warm tho (and I can’t stop thinking about the post BM like melody in it) It made a huge contrast to the darkness of Gaahls Wyrd and the pretty well executed orthodoxy of Whoredom Rife.

So it was Black Metal then and now in a nutshell with a dark nostalgic twist. All in all it was a pretty good concert, quite varied actually with an exceptionally good line-up.