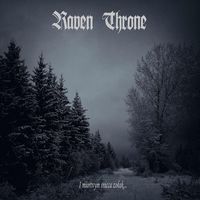 Raven Throne is a long runner in atmospheric black metal with "I Miortvym Snicca Zolak" their sixth full length but this is my first encounter with them. The band consists of merely two members, Denis "Chernotur Thy Wings" Lukianovic (Guitars, Programming) and a gentleman who refuses to be called by any other name than War Head (Bass, Vocals, Programming), but the sound and the music have the force of a full fledged band, not a project. The lyrics, being in their native Belarusian are nowhere near understandable so the Agallochian Opeth by the way of Heaven Shall Burn must speak for itself.

While every track is decently varied with ebbs and flows, all tracks follow a kind of now fast and aggressive now calm all acoustic balladry formula that tends to get monotonous fast, yet there are a few extra-metal references around which the songs are built. In "Imža, I Sklizota, I Prykraja Zol" the delicate beautiful overtones usher in aggression on a riff reminiscent of Christian alternative band Blindside "All Of Us", the following "Vosień" rhythmically echoes Depeche Mode’s "Everything Counts" while the keys in the gorgeous "Žyvym Vas Nie Daklikacca…" are Down "Jail", the only non-metal track on "NOLA". Out of all six compositions I found the opener "Vietru" the most convincing and enjoyable with the rest on an decent even keel.

While the bass, drums and guitars are of high quality I found vocals to be monotonous and quite underwhelming whereas more variety would breathe more air into the compositions. I also found myself easily distracted with subsequent applications having figured out the material after merely a second one, which gave me an impression of shallow texture as if there was not much to explore beyond the first impression.

After a sixth album the listener should be more drawn to the good but not great material but this album suffers from inherent lack of replayability value. I was ready to review it after the first day of communion with it and that does say much for the musical depth. Something is missing from this picture but what I cannot tell.