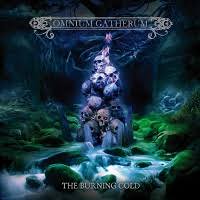 "New World Shadows" made Omnium Gatherum into one of the stalwarts in melodic death metal. Their sixth album "Beyond" revolutionized the genre by implementing elements of progressive rock of Marillion or Camel while remaining aggressively death metal. The follow-up "Grey Heavens" stripped down that approach rolling back the progressive rock influences while emphasizing and deepening emotional aspects of the music and lyrics in which they have approached Dark Tranquillity and even My Dying Bride, all without losing an ounce of what made them so compelling. The band spent a long time crafting the songs for "The Burning Cold" recording, traditionally, with Teemu Aalto but recruiting the mighty legend Dan Swäno (Edge Of Sanity, Witherscape) who produced Insomnium’s "Wintergate" one-track album. If you miss old In Flames and Arch Enemy this is your ticket to metal heaven.

Interestingly, Omnium Gatherum’s founding guitarist and main songwriter, Markus Vanhala has been simultaneously writing material for Insomnium for their past two albums although he says Omnium Gatherum is his first love, yet to paraphrase my facebook pal and Metal Temple reviewer, Justin Wittenmeier, it’s amazing how Vanhala can write for both bands and keep each band’s style distinct not only from other bands but from each other. Omnium Gatherum has always married a lot melody with really aggressive vocals for a chaotic balance between love and hate, according to Vanhala, who purposely concentrated here on a more guitar-driven music which resulted in more melodies and more solos than ever before, with tighter succinct songs, the album simultaneously more melodic and heavier than ever.

According to Vanhala, there are two major lyrical concepts on the new album. First it focuses on great human tragedies and misfortunes that are all around us, such as war and the engulfing darkness that follows; fortunes which are tangled in experiences that we all share despite this seemingly burning world. Secondly, the lyrics speak loudly about the human emotional condition. How do we love? Why do we hate? Why are some things easier to leave behind than others? Why does death terrify us, and if it does why do people act like it does not exist? Metal has never been afraid to ask big questions, but rarely has a band invested such sincerity and thoughtful power into their music, claims Century Media. "The Burning Cold" dares to be all things to all people: it’s a dark, heavy and vivid adventure through the trouble human psyche and the turbulent world around us, but it’s also an exhilarating and big-hearted celebration of the rejuvenative power of gloriously bombastic heavy music. There’s a lot of energy, there’s a lot of hope, there’s a lot of gloominess, sums up Vanhala.

"The Burning Cold" is like a melodeath flower with 11 petals of shades of the genre, an encyclopedia of all things melodeath, if you will. You can put it safely on your shelf between In Flames "Colony", Soilwork’s "A Predator’s Portrait" and Hypocrisy’s eponymous. There’s Killswitch Engagesque/Arch Enemy-ish riffery and light/dark interplay on "Gods Go First" and "The Fearless Entity" (the title possibly a nod to "Khaos Legions"), Worlds Within Margin/Free Fall/Zombie Inc. In Flames-ian power chord driven almost gothic melody on "Rest In Your Heart", "Be The Sky" and the virtuosic "The Frontline", respectively, ferociously death metal My Dying Bride-ish/Hipocrisy-c doom of "Driven By Conflict" and "Planet Scale" (likely aimed at making Peter Tägtgren green with envy so he gets busy with a new Hypocrisy album after that 6 year hiatus), there’s progressive rock interplay interwoven throughout the songs while never as dominant as on "Beyond", with the closing "Cold" (that would make Peter Tägtgren proud), a creative variation on Metallica "One" turned melodic mid-pacer with a perfect ending via a Buddhist meditation awareness chime as if to say "that’s all folks, now get up and be alive!"

Another wonderful aspect of this perfect masterpiece is the variety and strategic track placement that invite maniacal replayability. The three power chord groovers are just enough apart from each other as to allow gradual brutality and intensity build up for the more savage material to wake you up from the romantic bliss and bring it back when you start to miss it wading through God Dethroned/Arch Enemy almost black metal overtones of "Driven By Conflict" or "Planet Scale" that’s still never too far from gorgeous melodies that make life a blessing just for hearing them.

But the album’s undeniable charm emanates also from the emotions enchanted within the notes, just as promised, emotions that sneak up on an unsuspecting listener. It’s been a while, due to personal emotional block I unwittingly induced, since I genuinely cried while listening to music, although Horrified’s "Allure Of The Fallen" came pretty close to accomplishing that feat. But "Refining Fire" with its Soilwork meets band’s own "New World Shadows" – style songwriting hit me so hard with a chorus "Sunrise to sunrise/our love reigns supreme/mightier than any tide" that surprisingly made me shed tears invoking a sense of boundless hope that good will eventually prevail in my dark cold world as "Rest In Your Heart", a rhythmic syncopated riffing gave way to a chorus melody that completely and utterly slayed me with emotions of the sort I never even knew I kept pent up within as they came gushing out with that salty taste again and I thought this must be what Heaven and God Himself are like with its ending alone worthy of Grammy in any category, while "Be The Sky" middle melody (2:27) had me feeling like I was standing in the presence of the Almighty Spirit. It was as if "Refining Fire" challenged me to an emotional Mortal Combat, "Rest In Your Heart" defeated me and "Be The Sky" cried "finish him"!

Time and space will not allow me to go into full detail about the fantastic solos ("Fearless Entity" downright neoclassical) interplay between both guitarists Vanhala and Joonas Koto and Aapo Koivisto’s keyboard now passages now its own melodicism now strengthening the guitar melodies for a more devastating emotional impact, or of Erkki Silvennoinen’s proggy Marillion-ish bass (Over The Battlefield) or the newcomer Tuomo Latvala’s versatile, varied, consistent drumwork. And what of the choral keyboard atmosphere and choirs straight from Fear Factory classics, Jukka Pelkonen’s thunderous and totally legible gutturals (I don’t have the lyrics) vs. serene near shoegazing cleans vs. Anders Friedenesque murmurs, what of the CLIMATE that this music evokes, hope against hopelessness, mercy over mercilessness and sweetness over bitterness, indeed, the burning cold!

"The Burning Cold" is exactly what Markus Vanhala and Century Media hyped it up to be and so much more. Omnium Gatherum has done it before and in a spectacular fashion but this album turns up every aspect of what makes them so compelling into the stratosphere or, to again borrow from Wittenmeier, puts it on steroids, plus, to double after Century Media, the sheer emotional weight behind these vital, inventive metal anthems make this much more than just another record in a sturdy catalogue for arguably their magnum opus. There’s hunger, urgency and freshness here that almost gives an impression of listening to some new melodeath band as opposed to a twenty-one year veteran on its eight full length.

The album comes out in Europe on August 31, and September 7 in North America so go get it like I will or don’t lie to me that you are a metalhead. Album of the year, period.