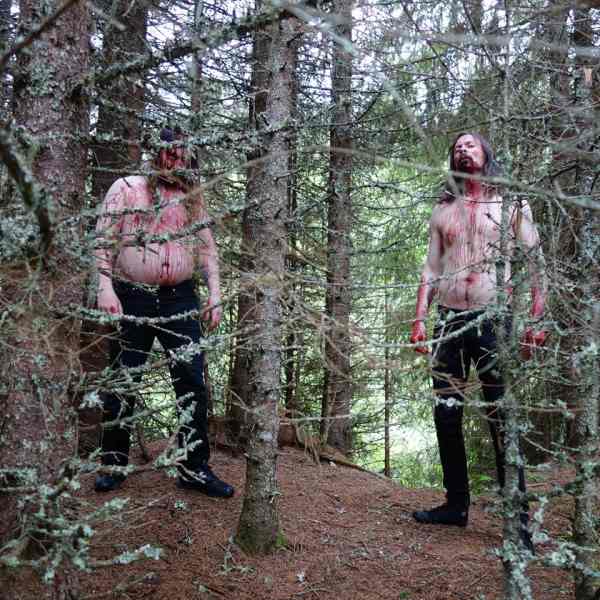 The Trondheim-based black metal combo named Gjendød released an excellent and utterly compelling 3-track demo on Darker Than Black Records and Hellthrasher Productions last year that was quickly picked up on by a lot of people in the underground. Something sinister and strange was obviously going on in that most of unholy of places called Trondheim and Gjendød was the living proof! Now, less than a year later, the debut album is out. Simply entitled "Nedstigning", it contains seven morbid and moody hymns that are well worth immersing oneself in.

In many ways, Gjendød pays homage to classic Norwegian black metal in the sense that the riffs, melodies, song arrangements, and overall atmosphere that run through "Nedstigning" bring to mind some of the masterpieces and pioneering works of art that came out in the early 90s. However, Gjendød has a musical identity of their own. Unlike many other black metal outfits, Gjendød is neither a cheap clone nor a lame rip-off. Or to phrase it differently, it sounds as if K (guitars, bass) and KK (drums, vocals) are merely inspired by early Norwegian black metal, but they have spawned and created something that they can rightfully call their own.

The songs al l consist of countless memorable riffs and melodies and so on, but the the thing is that the music sounds layered and textured. The music has more nuances and subtle details to it than most would probably think the first couple of times they listen to "Nedstigning". The harmonic and dissonant are locked in constant struggle, which creates a truly eerie and loathsome vibe in places. Gjendød also varies the tempo quite a bit, which turns the whole album into a rather dynamic affair. One thing that really fascinates me is how these ugly fucks are able to write and arrange music that is so hypnotic and trance-like and yet so full of twists and turns. The creepy and doom-like title track is the perfect example of what I mean. Other highlights include the epic "Kvalt av Fornuft" and the vicious "Utrydd Den". The production is suitably organic and all the instruments are clearly audible, so no complaints there whatsoever. Rough around the edges and dark, just the way I like it.

There is nothing modern or innovative about "Nedstigning" as such. This one is all about quality black metal with a foul spirit and a pitch black atmosphere to it. You ought to check this album out now!

LUX PERPETUA – The Curse of the Iron King