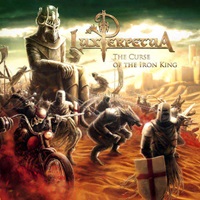 LUX PERPETUA – The Curse of the Iron King

Originally together from 2004-09 as Sentinel, the band would transform into Lux Perpetua and as a sextet stride into their power metal stature, releasing the "Forever We Stand" EP in 2014 and finally gaining the chance to issue a full-length with "The Curse of the Iron King". Poland probably is not as well known for this style as say Germany, Finland, Sweden or Italy, but do not discount bands from fresh territories – as they could offer up just as potent material as renowned lands that have proven themselves worthy to hoist the flag for the genre.

What is immediately evident with this 12-track, 54-minute record is the racing synchronization between the guitars, keyboards, and double bass thunder – all hallmarks necessary to convince even the pickiest follower of power metal. Orchestration adds to the upbeat nature of many tracks, it’s obvious Lux Perpetua love Helloween, Blind Guardian, and others who inject that speedier brand of heroic, fantasy-laden metal where the double bass, uplifting choir-like choruses, and guitar/keyboard runs lead the charge – along with supplementary narrative passages to tie the storyline together. You’ll be hard pressed not to sing along to stirring efforts like "Army of Salvation", marching into battle "Riders of the Dead" or the symbolic title track. As a vocalist, Artur Rosinski has an interesting take on his delivery – sometimes flatlining in the lower register but reaching the upper tier with gusto when necessary. This could be a deal breaker for some who would prefer a cleaner, stronger range a la Andre Matos or Michael Kiske, but for others this grittier approach could be a welcome diversion.

It’s hard to dissuade yourself from enjoyment when you hear all the blitzkrieg power runs and keyboard/guitar tradeoffs going on throughout "The Curse of the Iron King" – all given proper positioning thanks to the mastering skills of Seeb of Orden Ogan. Call to arms anthems never go out of style, as such Lux Perpetua holds potential and deserves the buzz going about based on this record.

WRATH OF ECHOES – A Fading Bloodline