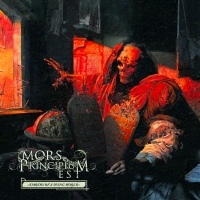 The sixth installment by Finnish melodeathsters largely brings no surprises. By now you have become familiar with the sound, the characteristic riffing and occasionally brilliant melodies already fully realized on "And Death Said Live", arguably their best output yet.  I think I have finally gotten over that characteristic Gothenburg "tata, ta,ta,ta,ta" riff style and this new album made me realize that. Noticeably, the first side is significantly better and more creative than the second as though, to put crudely, they shot their entire wad on first 6 songs and then ran out of gas limping for the rest of the proceedings despite the sound which is probably their best they have ever had, not boomy, crisp but heavy allowing for a detailed reproduction.

Two songs "Into The Dark" and "Death Is The Beginning" (yes, it’s Mors Principium Est in English) stand out right away. The former is a Dark Tranquillity-flavored melodic treat that also recalls Trivium’s "Ascendancy" and features almost exact "When Darkness Falls" Killswitch Engage riff likely on purpose since he sings "when the night falls" (but that it is also almost exactly like "The Leader of Titans" from Mors’ predecessor "5th Era" is inexcusable) The second is hands down the best song on the album and one of the best songs this band ever conceived, with a fantastic fresh epic melody, ballad-like, a Mariah Carey-like female vocal, a very emotional number. I got almost scarred by the growl though, and since he’s singing about something precious and beautiful like missing a loved one too soon departed the vomit growl does not fit here like the beast after the beauty. There is also a wonderful cello part and a progressive transition with a spectacular solo almost Pink Floydian in places. Instrumental "Agnus Dei" (Latin: Lamb of God) is a surprise touch from such nihilistic and death-focused musicians, a number fit for a church choir, but it does follow a rebellious lyric on repent-less approach where singer Villo Viljanen prefers to "let the gods judge me for there is light in me", so it creates an interesting contrast or perhaps the instrumental is a mockery of Christian ideal. What I like is how truly bombastic this stuff can sound, Mors marrying neoclassical convention with melodic death metal, what I don’t like and feel free to call me a dick, is the passing of a solo for a chorus melody. There are bands who do it to death and Mors is the chief offender in the matter. The rest of the material has many atypical elements and the compositional qualities are astounding but they don’t amount to very good songs.  I’m also not sold on starving the song for melody until my ears practically beg for it "The Colours of the Cosmos" case in point, even if the melody is exceptional. Another example is the closing "Apprentice of Death", where the melody may be fairly generous but it’s overwhelmed with less exciting neoclassical keyboards, for probably the weakest track on the album. Finally, too often, Mors seems to think that In Flames "Clayman" was so great an album that its minimalistic stylings are worth emulating by handfuls, while some of the songs sound like leftovers from previous albums, especially "Liberation=Termination", almost as if the band was pulling AC/DC on a listener.

I am being harsh because I know what this band is capable of, I remember how great and addictive "Liberation=Termination", "And Death Said Live" and even "The 5th Era" were and how fantastic "Into The Dark" and especially "Death Is The Beginning" is from this album, and how the rest of this material is just good above average melodeath that fails to grab me like the past accomplishments. Where’s are the likes of "I Am War" or "I Will Return"? Metal ought to be either brutal and aggressive or melodic and if it’s both that’s a bonus. Meanwhile, with few exceptions, this material is scarcely melodic and hardly aggressive. Perhaps, if I were really a dick, I would rename this album "Embers of Dying Melodeath" because I am so disappointed but this one is not going to stay in too heavy a rotation except for that near perfect number 6.

CULTES DES GHOULES – Coven, or Evil Ways Instead of Love