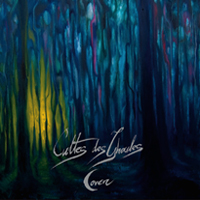 CULTES DES GHOULES – Coven, or Evil Ways Instead of Love

Coven is the third full length release from Cultes Des Ghoules. Conceptually, it is a pretty awesome undertaking. The 5 songs clock in at around 100 minutes in total. Then, there is narrative, atmosphere and an approach that makes it feel as if you are attending the world’s first true black metal opera (and just because I use that word don’t expect anything necessarily symphonic about this opus). While modern in terms of production etc. Cultes Des Ghoules always manage to capture that medieval feeling of the terror and confusion of an occult world that makes little sense to its maddened inhabitants. Adding all of these things together, Coven is a pretty amazing proposition and the fact that CDG should even attempt it in the first place says much of their intense willpower and artistic confidence.

This time around, the sound has continued its progression into ‘black doom’. There is very little actual blasting and the bass sound reminds me more of Reverend Bizarre or Barathrum than any of the class BM acts more commonly compared to CDG. The guitar sound is close to early Celtic Frost at times (never a bad thing surely?). Interestingly, and in keeping with the feel of this being an aural play, the vocal styles change frequently from hissing BM ghoul to clean and bombastic, to unhinged narrated passages. And yes, it all works and contributes in spades.

The only negative I have with Coven is its long-windedness. It frequently takes too long to get to the point (I accept that on the other hand that precisely is the point and I may be choosing to miss it. And I hold up my hands as always to admit that I am not the most patient listener). Yes, the memorable riffs are there, Yes, the sound is epic. But because it takes so long to get where it is going, and because some of the sections feel overlong this damages the immediacy and impact of the record.

Having said that, CDG’s catalogue is all the better for this release and the world of metal is genuinely a better place with this record in existence and that is an extremely rare thing…