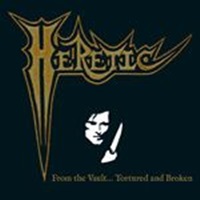 HERETIC – From The Vault…Tortured And Broken (2 CD)

A 28 song, 2 CD set with the early years of Heretic covered on this retrospective. Consisting of the long sought after "Torture Knows No Boundaries" EP from 1986, the "Breaking Point" album of 1988, their "Metal Massacre VII" appearance with the track "Impulse", and a number of live tracks filling out the efforts, this is a California metal band who were straddling the lines of power/thrash at a time when the Bay Area speed movement took off.

"Breaking Point" features ex-Metal Church singer Mike Howe on vocals, and is another strong example of his potent pipes, while the band delivered some killer metal riffs and solid tempos in the vein of acts like Fifth Angel, Liege Lord, and Riot. "And Kingdoms Fall", the heads down "Let ‘Em Bleed" and epic 7 minute closer "The Search" (featuring a lot of pronounced bass line a la Steve Harris from Dennis O’Hara) are worth checking out if you want to dig deeper into the productive 80’s US metal scene. Of the three live tracks from the Mike Howe-era tacked to the end of disc one, two originally appeared on the 1986 EP so you get to hear Mike’s melodies over the top and there is an AC/DC cover of "Let There Be Rock"- be prepared though for a rough audio quality to these live cuts as they are not of a pristine quality.

Disc two features current vocalist for Heretic Julian Mendez from his early years on the "Torture Knows No Boundaries" EP, as well as "Blood Will Tell" from their last studio album in 2012 and 7 live tracks from a previous unreleased 1985 show, again in rough form. There will also be a DVD capturing two shows from 1985-1986 that I wasn’t privy to view, but I would imagine this is killer for those into seeing US metal in those early club years.

Heretic back in that era probably gained more respect and admiration outside of North America than within- their style definitely more influenced from the Iron Maiden/ Judas Priest school with strong guitar parts and steady tempos plus high octane vocals than necessarily fitting in with the thrash times. Do not be afraid to take a peek into metal’s history and discover this box set.