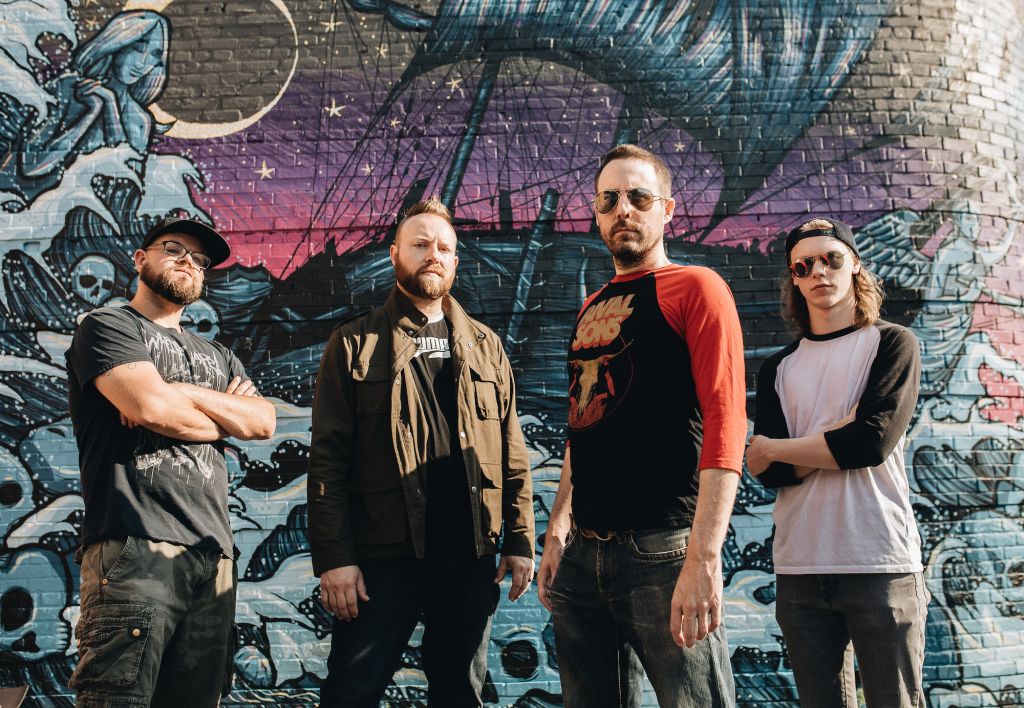 Cthulhu Dreamt is a concept project exploring themes of loss, fear, depression, and battling elements larger than ourselves, with a music combining cinematic orchestral and synth hybrid music with various genres of metal, including djent, doom, death, and prog. Their adventurous spirit was an interesting discover for us and below you have a little chat with the band to learn more about their music and ideas that led to such a project.

Introduce your band, and describe your latest release:
We are Cthulhu Dreamt, and we’re from all over the world developing a large project with a sprawling story through different mediums including music. I (Reed) started the project with friends Jeremy and Jake Myslinski (The Coming Darkness, Ben Larson, and Nate Berntson. Along the way we’ve added some elements and my friend Chris Durston joined the project as well.
Our new single “TRACE Amounts of Death” is the first release from our upcoming EP Precursor (due out this fall). The track itself is a blend of metal genres, and is about the creatures that inhabit our planet as Cthulhu begins to influence our world.

What’s the hardest part about being a band in this day and age?
Scheduling and logistics. Even our project, which is a studio based concept project, has people from all over the world involved; a few of us are from the Twin Cities in Minnesota, Jake is from Utah, and Chris is from the UK.

When did you realise that your project had the potential to be much more than just a fun idea?
Immediately. I write media and film music as part of my work, and I’ve centered my creativity around telling stories, whether it’s with music, film, or words. From there it was getting the network of people together to bring vision to reality.

Tell us about your latest release, why should we check it out?
I think “TRACE Amounts of Death” ( https://ampl.ink/CDTraceAmounts ) is worth checking out because it it’s hard and fast. It also weaves through a journey of its own, so you begin to get the sense of Cthulhu Dreamt, that it isn’t necessarily locked into any particular sound or genre. Also, this track delves further into the world of Cthulhu Dreamt by introducing a short motive (theme) for the creatures (TRACEs) which will populate the TTRPG that’ll be announced soon.

How does a song typically come together for you?
I, or any of my mates, will write a riff and once I have that, I’ll develop that and arrange the entire song around that. Sometimes one of the others will send a fleshed out idea that I’ll then take and orchestrate with remaining instruments or second parts/sections. Once the structure of the song is complete, that’s when I’ll begin writing lyrics and recording vocals. Some stuff happens fast, and sometimes it takes a minute. For instance: the opening riff from “TRACE…” was one of the first things I wrote for our second album LIMINALITY, but I didn’t crack the track until now.

How would you describe your sound to an unfamiliar reader?
It’s a melting pot of metal and probably not for purists. Someone looking to go on a journey should have a great time listening to the music, but if you’re here for an album of death metal, or djent, or whatever, you’ll find a couple things, but may have a Moore difficult time getting into every track.

What do you want listeners to take away from listening to your band?
I started this project to process the trauma of losing my daughter, and the subject matter includes emotions like grief, depression, and loss. If these things resonate with anyone listening, then that means it’s successful. If the listener is here too hear some good tunes and vibe out, then I hope that’s the minimum we can achieve.

Where would you really like to tour that you haven’t done so yet, and why?
We haven’t begun touring with Cthulhu Dreamt, so pretty much anywhere. Though, it’d be nice if it eventually parlayed into touring the world. I’ve never been to Europe or Asia, and think that’d be pretty rad.

How would you say that the sound of your band has progressed over the years?
The more we write, the further we expand our boundaries and really find our voice. I’d say we’re tighter, cleaner, and more focused now, though I’m still proud of our early efforts.

How excited are you for 2022, and what can fans expect from you?
As we wrap 2022, I’m so excited. We’ve got the EP coming out this fall which will be the precursor for some massive announcements about the next chapter of Cthulhu Dreamt: The TTRPG!
If this is something that interests folks, they should check it out at https://cthulhudreamt.com or follow us on our socials:
IG: @cthulhu.dreamt
FB: @CthulhuDreamt
Tw: @CthulhuDreamt