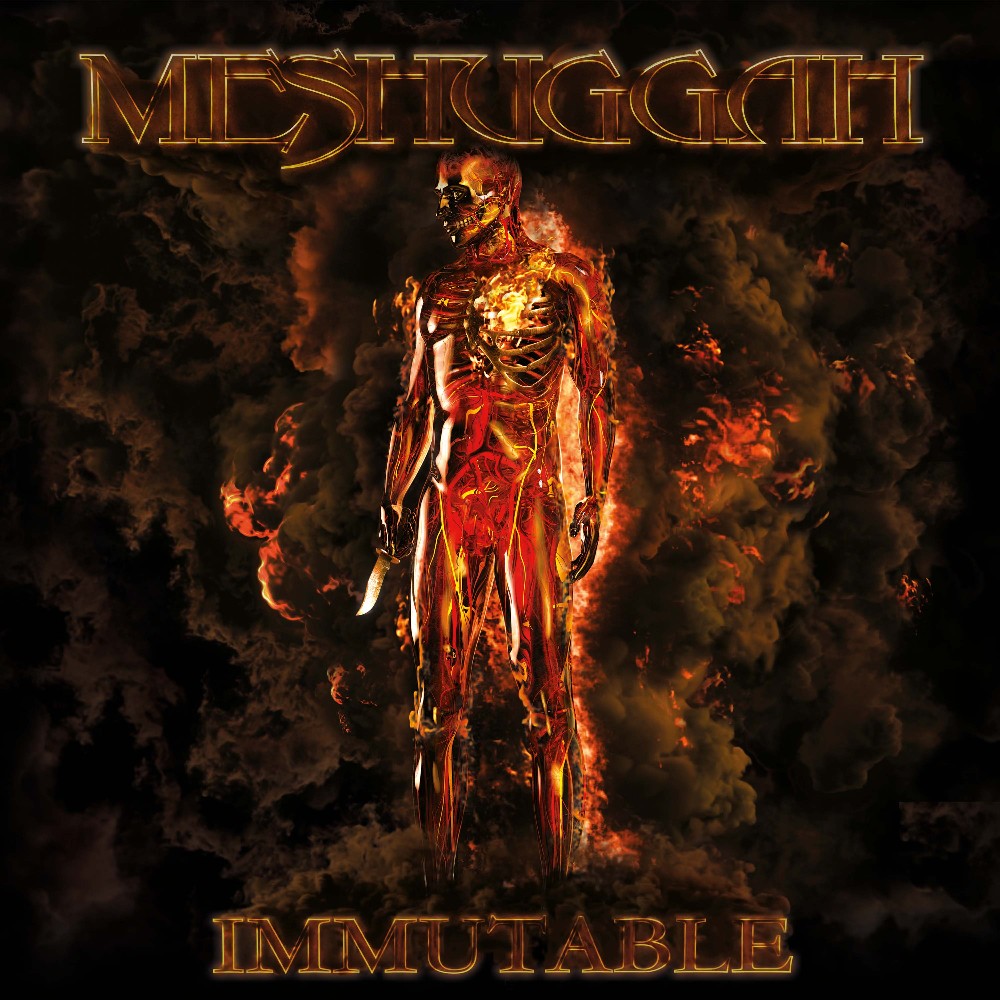 At the risk of committing a cardinal reviewer’s sin I’ll get right to the point: “Immutable” towers above both “Violent Sleep Of Reason” and “Kolossus”, easily the best thing since “Obzen”, plus it’s their heaviest and most crushing offering to date. It could be because the entire Swedish quintet that is Meshuggah 2022, Jens Roland Kidman (vocals), Carl Fredrik Thordendal (lead guitars), Hans Mårten Hagström (guitars, backing vocals), Dick August Lövgren (bass) and Nils Tomas Haake (drums) have shared the songwriting duties or it could be because of the incorporation of other genres by inspiration with the bands who had borne the Meshuggah influence in their works to begin with, acts such as Fear Factory, Machine Head Living Sacrifice or Gojira, but, to these ears, the biggest change, one which could admittedly disappoint some long time fans, is the easing up on some of the complexity to the benefit of greater memorability with soaring, howbeit 100% Meshuggahic melodies all over the place. Indeed, “Immutable”, their tenth album, reads like both the quintessence of the band’s discography and their most heavy metal album since the debut thrashfest “Contradictions Collapse”.

Most of you who read this know the story: created in 1987 and functioning for a year, Meshuggah (the name taken from the Hebrew and Yiddish word for “crazy”) had quickly reunited and soon released “Contradictions Collapse”¹⁹⁹¹, a thrash metal album heavily inspired by “…and Justice For All” Metallica (ever noticed that when it’s pronounced it sounds like “injustice”?) but they really blew the metal world away with one of the most influential albums on the scene, the aptly and prophetically titled “Destroy, Erase, Improve”¹⁹⁹⁵ which may have inspired Fear Factory to change direction from pure death metal and Machine Head’s “The More Things Change” among many others. The album was arguably their most accomplished work to date, one which, to these years, neither “Chaosphere”¹⁹⁹⁸ nor “Nothing”²⁰⁰² were able to destroy, erase or improve. The following “Catch Thirtythree”²⁰⁰⁵ was good and may have inspired Gojira for “From Mars To Sirius” but Meshuggah was getting too complex for their own good while memorability suffered. Then, finally, they released the excellent “ObZen”²⁰⁰⁸ which neither the following “Koloss”²⁰¹² or “The Violent Sleep Of Reason”²⁰¹⁶ (reviewed here by me, 4/6) were able to match. In what way is, this here, “Immutable”, different in this regard?

Firstly, it’s unbelievably heavy. The opening “Broken Cog” opening riff evokes images of the police knocking on your door at 4 AM, likely due to a case of mistaken identity with a suspected terrorist and a mob boss drug czar, which the creepy Kidman’s whispers atop of an eerie melody only reinforce. The following “The Abysmal Eye” maintains the quality with some thrash influence toward the end which is a natural progression into the first pearl on the record, the magnifiscent “Light The Shortening Fuse” with riffs which could be at home just on Machine Head’s “Burn My Eyes” as on Living Sacrifice’s “Conceived In Fire” (the latter another act influenced by the Swedes most notably on “Reborn” album) with fantastic melodic leads and enough twists and turns to call it progressive for the first half’s best track.

While both halves of the album are almost of equal quality the three back to back pearls: “I Am That Thirst”, “The Faultless” and “Armies Of The Preposterous” make the second half better, truly progressive works of art. While “I Am That Thirst” surprisingly leans melodeathly a’la early In Mourning or “Beyond” Omnium Gatherum, “The Faultless” reminds us why Meshuggah is top notch as touching both complex math metal and top notch guitarwork, and, finally, the last song proper, “Armies Of The Preposterous” recalls “Mechanize” and “Messiah” Fear Factory (which, needless to say, were heavily Meshuggah inspired) but the ending Immolation-like dark melody takes me by surprise.

No Meshuggah album being perfect, the flaws of this one are twofold. Firstly, with 13 tracks clocking at a whopping 1:07 minutes the album could have used some editing and, to my ears, both “Ligature Marks” and “Kaleidoscope” could have been excluded without compromising the whole as they remind me of some of the less engaging tracks on “Violent”, with fewer riffs and changes. Secondly, we have three instrumentals and, while the closing acoustic ballad “Past Tense”, with its “Songless Bird” My Dying Bride of a start is a welcome and impressive addition showing Meshuggah’s versatility, I have a problem with both “They Move Below” and “Black Cathedral” but for different reasons. Apart from its unnecessary 9 minute length, “They Move Below” starts up accoustically great, erupts into an electric monster with excellent melodies but all of its components do not justify the length. As for “Black Cathedral” it is simply fantastic, fusing black and death metal with ominous cavernous atmosphere only to whet our apettites and abrubtly end after 2 minutes. Seriously, what a waste of a potential for a killer track prematurely aborted in the womb, or, perhaps, that’s the intended point?

Any way you slice it, overall, Meshuggah really impressed me with everything on offer on “Immutable”. The album is true to their reputation and prowess plus there are signs they are ready to expand, perhaps in the directions and areas that will thoroughly surprise on future endeavors. This is like a companion peace to Fear Factory’s “Aggression Continuum” without the clean operatic singing, if you thirst for comparison, which means that it, too, comes highly recommended.

RUST N’ RAGE – One for the Road