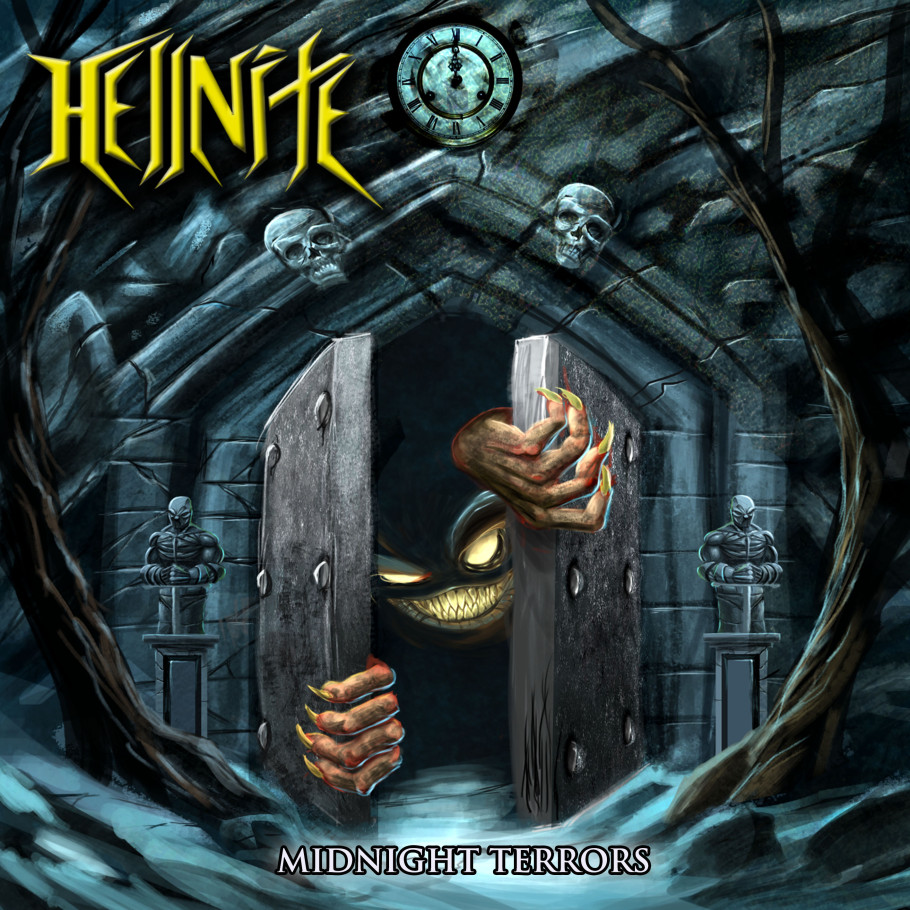 Let’s get one thing straight, because this is not the first time I see this in the promo rhetoric: while an EP is technically an album, calling it an album is misleading, especially when you call the debut "the second album". I don’t care how many EPs or singles anyone releases, if they have two full lengths, they have two albums, if they have an EP and an LP out then they have a one album out. You can totally call an EP or a maxi single a recording or a release just please don’t call them albums. Thank you very much in advance, dear labels and promoters.

Now, that that’s out of the way, let’s consider the debut album from the Canadian thrashened heavy metal ensemble, Hellnite, another band promoted by Jon Asher and Asher Media Relations. The outfit had an EP "Manipulator" out in 2013, howbeit by a different moniker (Hellion) and some of the songs on "Midnight Terrors" were originally recorded on that EP. Looking at the cover, the logo, and even the name we obviously love our Helloween but is that all?

Composed of Paolo Belmar (vocals and guitar), Konnor Miskiman (bass), Ryan Payne (drums) Hellnite attempt to come off as a thrash metal outfit in the vein of your early Slayers, Kreators and Megadeths but actually end up sounding like a heavy metal parody of thrash, especially in terms of largely aimless songwriting, to say very little of some of the worst "I’m suffering from severe emphysema but I also don’t care to fully pronounciate" vocals since Tom Araya on "Hell Awaits" (might have we been inspired?) Yes, the guitar, bass and drums performances are serviceable and Belmar has a few cool riffs up his sleeves he gladly shares with everyone such as on the "Ride The Lightening" Metallica "Spirits Prevail" heretofore a decent melodies a’la early Into Eternity (Phantom Force) or Death (The Necromancer) but the actual songwriting is as laughably nonexistent as on the severely overrated Helloween’s "Walls Of Jericho", an album, in fact, "Midnight Terrors" resembles the most.

There is literally one great track on this album of riff and melody accidents called songs and that track is an instrumental, mind you. "Darker Than Black" starts out like Iron Maiden’s "Fear Of The Dark" with intelligent keyboard/synth layers and it builds up to this sort of Metallica’s "Anesthesia – Pulling Teeth" part deux, as if all the talent and ideas, to say nothing of suddenly bursting originality, were reserved for precisely one song and then it’s back to "bore ’em all" where I find myself checking the display for how long I have yet to suffer.

Gentelmen, the 80s are over, they have been over for almost 30 years and no one will bring them back. What Slayer, Kreator, Megadeth, Metallica and Iron Maiden spawned then and some a little while longer afterward is matchless metal. Better musicians and better vocalists have vainly tried to recreate that spirit so, please, don’t feel bad that you, too, have utterly failed. Never too harsh on true debutantees I spare you, too, in the score, but I beseech you brethren by the mercies of God, do make something of your own, even with that sound as foundation to a brand new construct, unless you plan on ending up as one of those pointless tribute bands we are infested with these days.