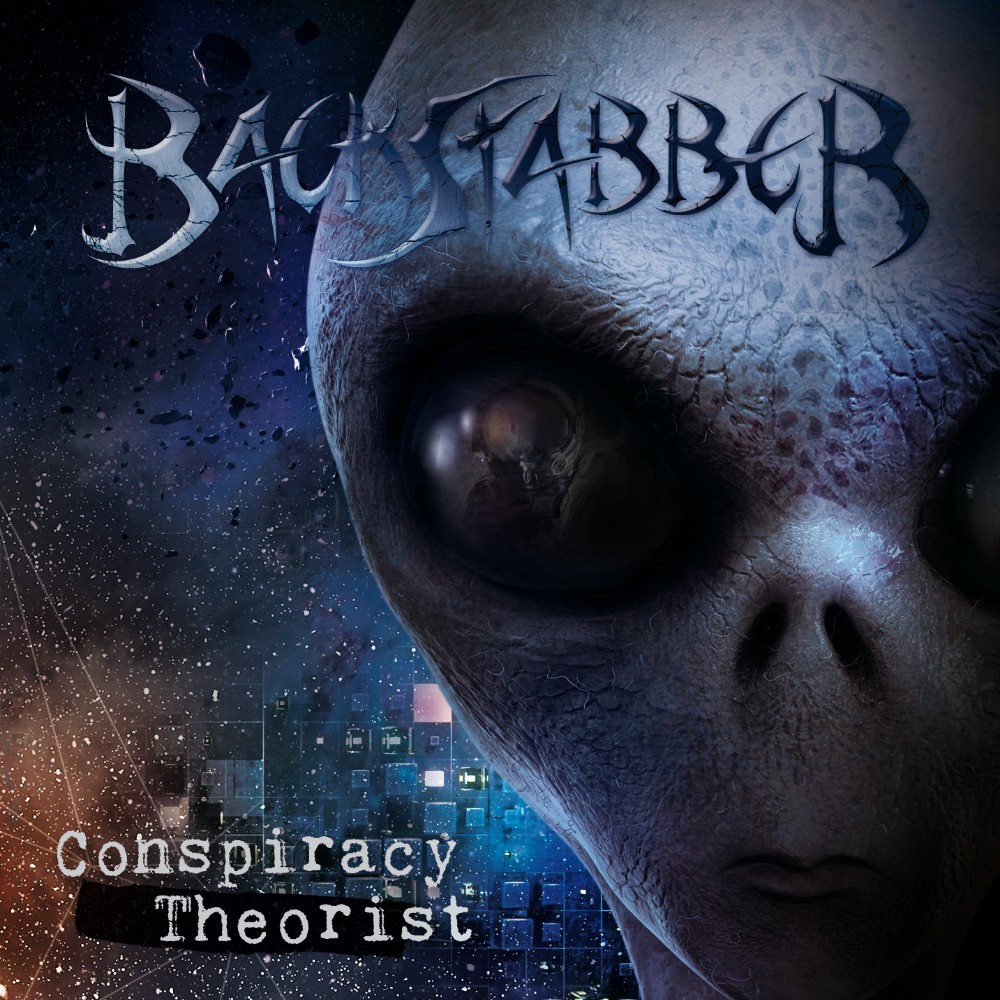 An album written entirely around conspiracy theories? Why not, bands as divergent as Iced Earth, Fear Factory, All Shall Perish and Hypocrisy have dabbed in it, so these Canadian death/thrash metal freshmen tread a fairly beaten lyrical path courtesy of promoter Jon Asher and Asher Media Relations. As things get scarier and more depressing on this flat/round (cross out the obsolete) planet, more people tend to believe that official explanations for Roswell ’47, the Kennedy assasination or 9/11 don’t hold much water and seek alternative theories. When these are accompanied by great music it makes that music all the more compelling, whereby we get excellent releases such as "Mechanize", "Dystopia", "End Of Disclosure" and "The Price Of Existence". How does this concept work for Backstabbber?

Backstabber, featuring Christian M. Theriault (Guitars & Vocals), Eric Seguin (Bass) and Patrick Gagne (Drums), gets mixed results on "Conspiracy Theorist". Combining influences as diverse as thrash metal of Ringworm (including the vocals) and death metal of Blood Red Throne and All Shall Perish (including the vocals) with melodicism of Hypocrisy (especially with the artwork reminiscent of "Abduction" or "The Arrival" probably on purpose), the Canadians construct decent songs such as "No Privacy", "Subterranean" or "Ink Spill" with a decent production of Theriault himself. Out of ten tracks three are instrumentals with only one enhancing the material, while both the opener, "Inaugural Address" and the mid-album "The Hum" (the latter possibly alluding to James Redfield’s "The Tenth Insight: Holding The Vision") are rather dubious attempts at expanding the concept, and, whereas the former can technically draw the listener into the web of conspiracy the latter just detracts from the momentum. Finally, "Geo Engineering" has an appearance of Immolation’s "Majesty And Decay" but denies its power, sounding as though Backstabber ran out of ideas at that particular point.

There are, though, four tracks which have more structure, hooks and melody, such as the opener, "Whistle Blower", which lyrically refers to brave corporate employees who alert authorities to corporate crimes, musically recalling the more cohesive and harmonious material on As I Lay Dying’s "An Ocean Between Us", or the favorite "My Disclosure" with good riffs and dark melodies underneath, the background riff to the solo recalling early 90s Sepultura, or "Banksters", lyrically referring to the problem of the US Federal Reserve Bank, the People’s bank, in all actuality in the hands of a private enterprise, which musically marries The Black Dahlia Murder verses and minimalistic bridge to a great latter Carcass chorus melodic chorus interplay. As previously mentioned, the closing instrumental title track is refreshingly relevant, with a very distinct bass and synth melody, surprisingly bluessy a’la Mark Knopfler.

With "Conspiracy Theorist" Backstabber draws on familiar influences but manages to put together a decent mixture of death and thrash but the songwriting is still largely in infancy stage, which is no surprise considering that this is their debut and the only release. The sequel should bring in more hoooks and variety and how about making those bluessy riffs a permanent fixture in overall sound for added originality?