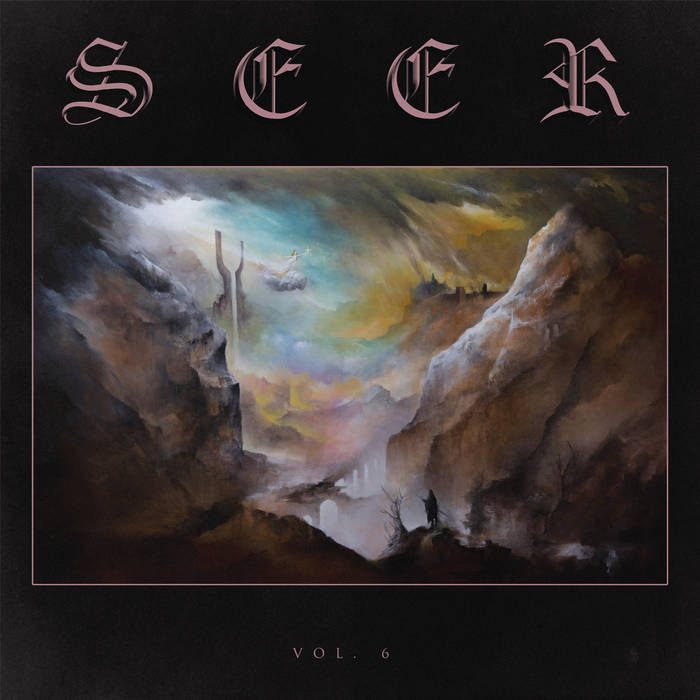 The Canadian doom/sludge metallers started in 2014 and debuted with a "Vol. 1" EP heavy and clear on Corrosion Of Conformity, Black Sabbath and Mastodon but with traces of its own budding sound, only a year later on Art Of Propaganda. The year 2016 brought "Vol. 2" EP on the same label, a more atmospheric material with added influences from Solitude Aeturnus and Alice In Chains. Finally, same label debut LP, "Vol. 3 & Vol. 4" was released in 2017, subtitled "Cult Of The Void", with "Vol. 3" a heavy, sludge/doom with cues from Tool, and "Vol. 4" a more mellow, mostly instrumental atmospheric material. It was the independently released "Vol. 5" EP released later that same year which introduced elements such as black metal and psychedelic vocals and tremolo riffs which inspired much of "Vol. 6" LP material. With a brand new label, Seer apparently sought to distance themselves from the doom/sludge pack and their 2nd LP is mission accomplished, and not the George W Bush "end of Iraqi War" 2003 kind of mission accomplishment, either.

Seer means simply a prophet, one with supernatural power to foresee future or see into the depths of human hearts. Whether we’re talking ancient Egypt, Greece or Israel, prophets are legendary and have been a tough challenge for atheists and agnostics. The Vancouver Seer lyrically matches seers of Appolo, Zeus or YHWH, be it Socrates, Isaiah, Jeremiah, Ezekiel or Jesus Christ: show men and women their depravity and lead them to the light. Whereas the Scriptures talk about the righteous and unrighteous and their eventual respective fate (Psalm 1), Vancouver Seer sees how "one deserves everything, every luxury piled in the tombs of dead kings" while another "one deserves nothing, not a mouthful of bread in hunger" (Seven Stars, Seven Stones). Both sources match the concern of Ecclesiastes that "on the side of oppressors…power, and…no one to comfort them…the dead…already dead more fortunate than the living who are still alive" (4:2), whereby the only sensible alternative seems to be "to accept responsibility/unchained from dogma/and to accept no rule, no punishment nor reward" ((Seven Stars, Seven Stones). This bleak and hopeless view of human condition is paramount to understanding and experiencing "Vol. 6".

Listening to this album is like climbing a soundscape ladder, acsending from the fiercely original and curiously relevant opening instrumental, "Oath Of Exile", full of eerie nature sounds and ominous chanting, through gradual buildup of the Mastodon-ian/black metal/shoegazing Depeche Mode-ian atmosphere of "Iron Worth Striking" with a spectacular solo worthy of Lenny Kravitz, up to the crown jewel of this album, the perfect extremely memorable "Seven Stars, Seven Stones" with a magnifiscent verse and chorus that deserves a Grammy award, and descending down through the very black metal Enslaved-like psychedelia and chaotic order of the genuinely creepy "Frost Tulpa" but again ascending up the excellent Mastodon-ic/Katatonian "As the Light Fades" with a piano transition echoeing Paradise Lost’s "One Second" and, finally descending all the way down the closing short instrumental "Prior Forms", the whole way encountering every form of natural flora and fauna sound your imagination can conceive.

The Jordan Koop’s mix and Joel Grind’s mastering job are both excellent, allowing for the thunderous and grimey Kyle Tavares/Peter Sacco riffs, leads backgrounded by Kyle’s excellent eerie keys/synths rivaling the legendary Alan Wilder (ex-Depeche Mode, Recoil), to hit the nerve right where Seer wanted it to, with Tavares’/Sacco’s/Bronson Lee Norton/Madison Norton drums (yes, 4 drummers) and Josh Campbell’s bass to resound in the caverns of your brain as you’re now caressed by Kyle’s and Bronson’s clean croons now tortured by their shrieks, rasps and growls, with the only escape to climb up and down the ladder.

The material pretty even but for the aforementioned "Seven Stars, Seven Stones" and "As The Light Fades", I wish there was simply more to sink my ears into as 6 tracks in 38+ minutes feels almost like an EP, especially with 2 instrumentals, but there is no denying that these guys have a fiercely original and powerful sound. They may not be the greatest songwriters ("Seven Stars", notwithstanding) but they are fabulous musicians and instrumentalists plus they have absolutely no respect for genre confines, always a plus.

Seer is a very interesting metal construct that only gets better with each release. On their way to somewhere between Mastodon and High On Fire they are already more than both, perhaps to fill in for too soon departed Solitude Aeturnus, but they need to hone in that songwriting for more "Seven Stars, Seven Stones" and less "Prior Forms".