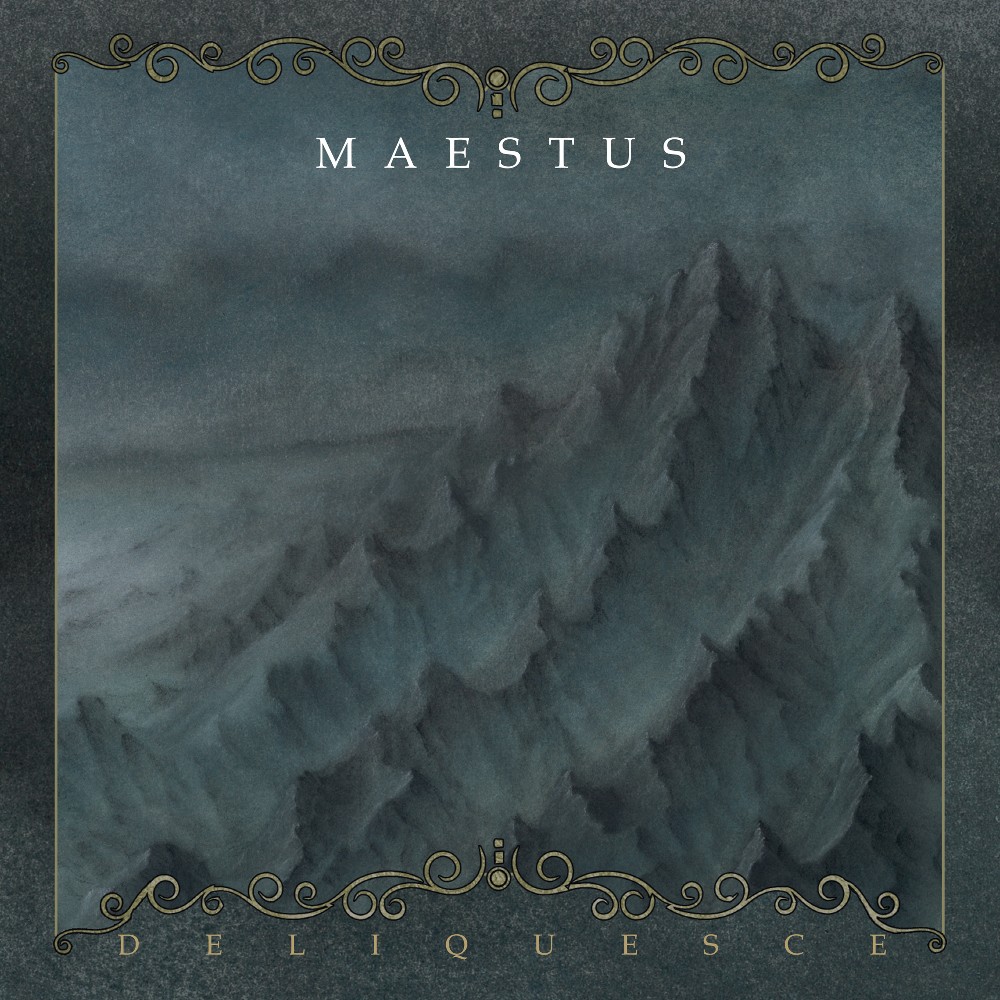 Maestus means ill-omened, mournful and grim and such is the music of this Oregonian blackened doom quintet. Formed in 2013, the group immediately released "Scarlet Lakes" EP on Glossolalia Records, 4 dirges in the vein of fellow Oregonians Agalloch but with more doom, less black and none of the folk. The debut LP "Voir Dire" (2015) on the same label, presented heavier, blacker, doomier, more intense Maestus, interestingly progressing similarly to Agalloch from "Pale Folklore" to "The Mantle". Is this just 4 track yet nearly an hour long new album, "Deliquesce", Maestus’s "Ashes Against The Grain" or are they progressing retroactively, instead?

It seems on their third opus Maestus jumped all the way to "Marrow Of The Spirit" and combined both worlds: their EP and their debut LP. Most of the material takes the heaviness, black and doom of "Voir Dire" LP and refines it for a greater impact but only to intersperse it with those melancholic acoustic atmospheric passages introduced on "Scarlet Lakes" EP. The production is inarguably the best they have ever had, the tonnage and expression as well as clarity comparable to the latest Mournful Congregation "The Incubus Of Karma", the latter also showing through the songwriting, structures and melodicism (title track). Stephen David Parker and Sarah Beaulieu lay down compelling piano and keyboard arrangments that either border on drone (The Impotence Of Hope) or become drone (Knell Of Solemnity), while his powerful growls resemble Peter Tägtgren (Hypocrisy), occasionally joined by Kenneth Parker’s clean croons recalling Daniel Bryntse (Isole), but when the black metal rasps appear (Black Oake) or when they seem to compete against the growls (The Impotence Of Hope) I can’t tell whether it’s Stephen doing both or Kenneth rasping or the other way around. I would not be surprised if they switched back and forth, considering the overall quality of "Deliquesce", the gargantuan title track (over 15 minutes long) a sprawling representation of the entire LP, with Kenneth’s bass very distinct and relevant while conforming to the eerie psychedelic atmosphere evoked by Stephen and Sarah’s synths, Cordell Cline’s drums walking the Earth to and fro like Satan in the Book Of Job 1:7, and, like the prowling lion of 1 Peter 5:8 seeking whom they may devour, all of which is oozing of irregular heartbeat patterns evoked by My Dying Bride on the excellent "The Dreadful Hours", which brings us to the separate issue – the guitars.

To say that guitars are fundamental to "Deliquesce" is like saying Jesus Christ is paramount to The Bible. Deliquesce means liqufying organic matter, typically during decomposition and that is the key to the heartbeat of this album. What makes these compositions magnifiscent is that the liquid matter, the blood of this opus, is not merely flowing through the guitars but that they build up on the vocal, section and synth lymphatic system as it where, while what they tranfuse could well stand on its own but doesn’t, the whole body supported and held together by the ligaments and sinews as in Colossians 2:19, so that there is no actual division in the body, but that the members have the same concern for one another so that, if one part suffers, all the parts suffer with it, or if one part is honored, all the parts rejoice with it (1 Corinthians 12:25-26).

This dynamic is perhaps most vivid in the Stephen Parker/Nathanael Kelley rhythm/lead work which is highly evocative of My Dying Bride’s Calvin Robertshaw/Andrew Craighan in the way they progress from calm acoustics to powerful mournful beautiful despair and hopelessness (Black Oake), or Paradise Lost’s Aaron Aedy/Gregor Mackintosh, the title track’s gradual progression recalling "Enchantment", or Daylight Dies’ Barre Gambling/Charley Shackelford, "Knell Of Solemnity" tugging at your heart the same way "Dismantling Devotion" did. The melodic progression with Maestus at its most convincing and coherent, is best served by the favorite "The Impotence Of Hope", the gaps between the calm atmospheric acoustics and powerful melodicism kept at arm’s length while, within this blueprint, there exists a web of ebbs and flows that’s still progressive, whereby almost a new, yet unidentified genre is born, as was the case with the now sadly defunct Agalloch on their third album, "Marrow Of The Spirit". For Maestus, achievement of the same already on their second album is quite a feat.

The size of this dynamic gap between the calm atmospheric acoustics and powerful melodicism is where the single flaw of this endeavor lies. Whereas "The Impotence Of Hope" is where this gap is relatively small, the title track is where it gets so big that Maestus loses the momentum build up so paintakingly by the roaring instruments, the listener thrown into admittedly fantastic bleak atmospherics for a long time only to be brutally brought back by returning instrumental tidal wave. This works in Maestus’ disfavor in two ways: it risks relaxing the listener to the point of momentary lapse of consciousness and then it gives him an undeserved heart attack with the resuscitative power chords. This is the same problem Mournful Congregation’s "The Incubus Of Karma" had and My Dying Bride’s "The Dreadful Hours" did not.

"Deliquesce" is a gorgeous soundscape rollercoaster deserving of every accolade, a marvelous achievement of their own niche, barely on their second full length, but some may find the journey a little imbalanced, destracting the otherwise enchanted listener, to whom I relay the words of Martin Charnin in the musical "Annie": there’s always tomorrow.