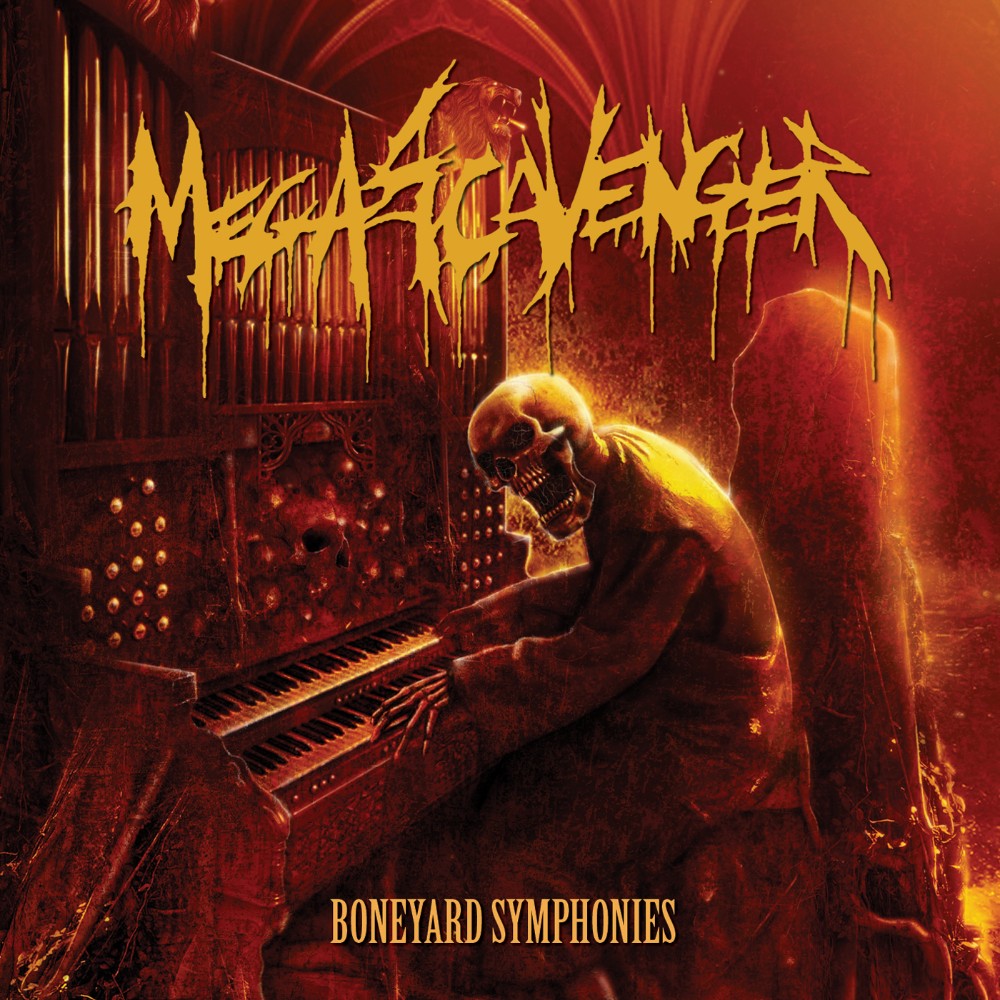 If one were to list all of Rogga Johansson’s Swedish old school death metal projects alone it would take the length of this review, to say nothing of all his projects. Only last year I reviewed a solid new release from Dead Amongst The Dead Men, where he is a guitarist, and here we have a new Megascavenger on our hands. Composed today of Rogga (vocals, guitars, bass) and drummer Brynjar Helgetun, Megascavenger was born probably sometime around 2012 and has four albums in their discography, including, this here, "Boneyard Symphonies".

Even though Rogga fundamentally pushes Swedish old school death metal on every Megascavenger album, each one is somewhat different. Whereas the debut "Descent Of Yuggoth" was a rather straightforward standard genre fare, if not quite a boring one, actually, already the second album "At The Plateaus Of Leng" could surprisingly rival Hypocrisy, mixing old School death with copious melody, all the more interesting because of experimenting with different styles vocalists; growls, progressive cleans etc. Unfortunately, Rogga only kept a little bit of this approach while otherwise heavily industrializing the third album, "As Oblivion Beckons". What could he possibly come up with on this next endeavor? Has he gone back to the more melodic "Leng", progressed further into industrial of "Oblivion" or perhaps combined both on this one?

Well, there was a fourth option: regress into "Yuggoth", which is pretty much what happened. In short, Megascavenger released the most boring album in their discography. Most of the songs are following the standard ménage à trois, Unleashed/Entombed/Dismember formula that is so predictable that once you’ve heard the second track, "Bone And Meat Machine", you’ve almost heard the whole album. And, I’m sorry, but there’s no excuse to have almost the exact same riff in two consecutive tracks (Factory Standard Slaughterdevice, World Sized Meatgrinder), be that excuse continuation or oversight, especially when the follower is the worst, least ambitious track on the album with vocals of a literal wolfman the only cool thing about it. Sure, there are some ideas that could have been good songs but aren’t, such as subtle melodies (The Unexpected Journey, Back To The Ancient Again) but the latter track is actually a worse version of the original from "Leng" album (Back To The Ancient) and the former’s melodies are so weak and brief if you blink you may miss it. And why is the admittedly cool speedup transition in just this one song?

Not all songs, thankfully, are cut from the same cloth (I did say "almost", didn’t I?). The opener, "Grotesque World Remnants" is actually good enough to get me excited for the whole album despite its blatant simplicity. And then there’s "Pandemic Rotting Storms" that is such a "Leng" quality melodic delight that it sticks out like a sore thumb. I could have not told you the title and you’d still correctly recognize it from the first exposure. Finally, the production is ironically the best Megascavenger ever had and performances are indubitably excellent, all of which begs the question: what happened to the songwriting?

With "Boneyard Symphonies" Megascavenger delivers their most boring and predictable album to date, which clashes with excellent production, album cover and suprising strength of a solitary track. Yet there is no doubt that Rogga Johansson is a talented multi-instrumentalist, so I’d just chalk this one up to the "every band is allowed one bad album" unwritten rule in heavy metal universe and move on.