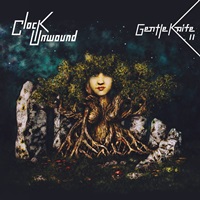 Progressive rock has been a part of this journalist’s life since childhood. Acts like Genesis, Yes, Kansas, and Rush made an indelible imprint, opening horizons in what could be achieved musically. Norwegian act Gentle Knife embody the spirit of diverse progressive rock cut from that similar 70’s-oriented cloth on their second full-length "Clock Unwound". Incorporating everything from woodwinds, flutes, trumpets, and saxophones against the normal electric, acoustic, and keyboard instrumentation, the sky is the limit for the band to paint their musical portraits – preferring broader strokes to take their initial ideas and expand upon them.

The ‘gentle’ side comes out in the multiple voices present – both male and female – offering an enchanting, playful perspective on the almost 16-minute plus title track, bombastic/pomp keyboards floating about as the woodwinds serve up the alternative push and pull jazz elements while the guitars build and dissolve. The lead guitar breaks are worthy of study, incorporating slower, measured notes in an art rock/ David Gilmour display to prove that you can be just as effective in getting your point across through a ‘less is more’ approach, as is the softer sax solo that takes place in the latter third of the arrangement. Often you get the feeling that you are taking in a cinematic or theatrical score, where narrative parts or poetic images flow against the prism of music Gentle Knife put forth – the vocal harmonies for "Fade Away" attain majestic beauty before ramping up the off-time keyboard/guitar maneuvers that give off a Jethro Tull meets Yes/Genesis vibe.

The band prefer to keep things a little more simplified when the vocal parts come out- which is refreshing as progressive rock can sometimes be too ambitious in both departments, going over the heads of some listeners as a result. There’s plenty of ideas to consume and process – the instrumental interplay breathtaking and comfortable – but you never feel like they go on excessive, outlandish tangents in these six tracks. Favorites include "Smother" with some laid back Latin percussion touches and the slow to dance-oriented shift for closer "Resignation" where the keyboards have a "Thriller" meets horror-like charm.

Art rock meets jazz and progressive music – "Clock Unwound" delivers another exciting product for fans of these genres to get behind. A pleasant surprise to these ears, well done Gentle Knife – you cut softly and open up spacious wounds to the soul.