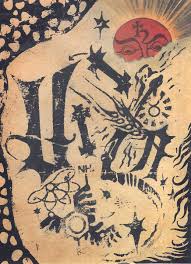 The twisted Russian trio named VTTA impressed me quite a lot last year by means of its "On the Vortex of Chasing the Abyss of Despair" EP, so naturally I was looking forward to this new EP of theirs entitled "My Sickle", which was released via Nomos Dei Productions back in April.

While VTTA is rooted in black metal, it is of such an experimental nature that it clearly defies and transcends the narrow confines of the genre. The music spawned by this unholy trio ranges from violent and charged outbursts of pure aggression to mellow and introspective parts that are both haunting and memorable. At times it even sounds a bit jazzy, but in a truly perverse and foul sense of the word. The warm and organic sound makes it sound as if the malevolent atmosphere of the EP is so prevalent that one could actually reach out and touch it. The demented and disturbing vocals on top of the vortex-like riffs make the whole thing sound even more depraved and sickening. I love the variety of each track and how one is constantly thrown for a loop by all these unexpected twists and turns that come out of nowhere. The unpredictability of each song is spellbinding. Some parts sound almost tribal-like and ritualistic in nature, but with an unsettling and menacing vibe to them. You can never know for sure what hellish paths these fuckers are going to lead you down. "In the Wide Mirror of the Mind" is perhaps the one tune that best sums up and defines what VTTA is all about, but all three compositions are superb and complement each other nicely.

Housed in a beautifully-looking A5 digibook, this sinister release is not to be missed. While its running time is only around 16 minutes, the quality of the music renders that irrelevant. VTTA remains one of the most enigmatic and mysterious ensembles that I have come across yet and "My Sickle" may well be the band’s most fully formed release to date. You know what to do!