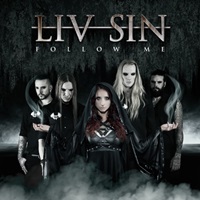 Pouring heart and soul into Sister Sin for 13 years, vocalist Liv Sin made her mark on the global front through her discography and live touring with the band. Once disbanding in 2015, she didn’t waste time assembling a new band and putting out "Follow Me" – the debut 11 song effort with her new label Despotz Records. Smartly surrounding herself with veteran musicians like Fitty Weinhold (UDO) and Stefan Kaufmann (ex-Accept, ex-UDO) behind the recording/production boards, the focus of this material appears to be an advancement of her work in Sister Sin, just with slightly more modern punch and attack.

The rhythm section of bassist Tommie Winther and drummer Per Bjelovuk get some instrumental spotlights on the double bass-fueled "Hypocrite", proving that metal anthems work beyond strong riffing and memorable choruses. At other times the material rides a mid-tempo wave, "Let Me Out" and "I’m Your Sin" swinging numbers with sultry Liv leather-lunged chorus passages sure to pump up audiences and get fists flailing at live shows. Patrick Ankermark and Chris Bertzell as guitarists unfurl a mixture of thrash to slightly extreme chord progressions while also keeping things in a familiar traditional hard rock/ heavy metal context – check out the fiery licks for "The Fall" as well the gallop flowing "Killing Ourselves to Live" for their vast abilities. Liv hasn’t lost any ounce of strength since her vocal surgery from a few years ago – roaring with passion, as well as sitting back in the alternative mix for the ethereal, half-somber, half-heavy closer "The Beast Inside" that features some killer twin guitar harmonies to elevate the musicality.

Saddened by the demise of Sister Sin, "Follow Me" should resurrect the faithful into Liv Sin, while hopefully gaining another new generation of metal heads who love to headbang, scream, and shout. Glad to have you back Liv – looking forward to seeing where this band will go down the line, as they are off to a fine start.