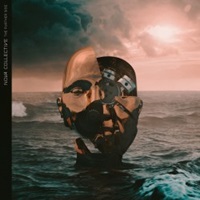 NOVA COLLECTIVE – The Further Side

A Trans-Atlantic collaboration between two sets of musicians in America and England, Nova Collective on their debut album "The Further Side" explores the jazzy/fusion progressive rock side of things with occasional bursts of heaviness. Guitarist Richard Henshall of Haken and bassist Dan Briggs of Between the Buried and Me started the group – recruiting keyboardist Pete Jones (ex-Haken) and drummer Matt Lynch (Trioscapes, Cynic) – at first sharing files back and forth until meeting up in 2015 to work on the album recording together.

What can the listener expect? Dazzling fusion sequences, advanced playing, and yet even with longer song structures (half the album hitting that nine-minute timeframe), there’s a sense that Nova Collective wanted to maintain a semblance of continuity and groove as the bass, guitar, keyboards, and drumming ebbs and flows. Songs like "Dancing Machines" and "State of Flux" challenge, intoxicate, keeping your ears on the edge of anticipation for the next measure, time change, and where the quartet aim to take you on this aural journey to the stars. It’s on the lighter side as far as distortion means, but titillating on the progressive side, as you’ll often hear two or more of these musicians synchronize in unison that gives this a strong jazz/fusion ambiance.

Progressive-minded folks will devour "The Further Side" – given the activity of these gentlemen in other groups, we can only hope that a follow-up record could appear on the landscape maybe before this decade’s end. Good from the first listen to the latest.