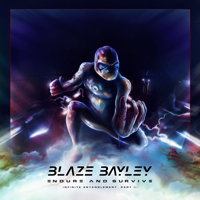 Blaze Bayley (Wolfsbane, ex-Iron Maiden) is one of the most underrated metal vocalists out there in my humble opinion. Nearly all of his solo outputs have ranged from very good to damn-near sublime with last year’s "Infinite Entanglement" belonging in the latter category. The point that I am trying to make is that Blaze is an excellent songwriter who knows exactly how to execute memorable and yet reflective heavy metal with substance and meaning to it. This brand new album of his entitled "Endure and Survive" is the second installment of his sci-fi trilogy/concept/storyline, which began with "Infinite Entanglement". Having teamed up with the members of the UK metal band Absolva (who basically function as the Blaze Bayley band) as well as a whole cast of guests and contributors, "Endure and Survive" does not disappoint. It contains just about everything that one could have wished for, which is to say that it is loaded with moody and atmospheric heavy metal of the highest order. Lots of great hooks and catchy riffs, moving and passionate vocals, haunting and melancholic melodies, and thought-provoking lyrics. There are also quite a few mellow and morose parts that serve as a nice contrast to the more bombastic and aggressive outbursts. I really dig all the spoken word passages, dialogues, monologues, and so on that are scattered throughout the record. Believe me when I say that this 10-track effort has a lot of depth to it. Lyrically, the storyline is captivating and compelling, but that is hardly surprising, is it? As to Blaze, he sounds as cool as ever. That booming and powerful voice of his remains intact. Such an underappreciated and underrated artist!

I would not go so far as to say that "Endure and Survive" is better or more interesting than "Infinite Entanglement", but it is the perfect follow-up to the aforementioned album and oozes quality from start to finish. It rarely ever loses momentum and all the pieces of the musical and lyrical puzzle seem to fit together. Stand-out cuts include "Blood", "Eating Lies", "Dawn of the Dead Son", and the strangely folk-like "Remember". Support Blaze by all means and invest in this one as well as the first part of the trilogy – Now!

NOVA COLLECTIVE – The Further Side