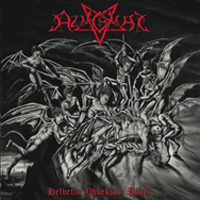 Seventeen years after it originally crawled from the abyss, Moribund serves up a reissue of the famous sophomore album from this Finnish juggernaut. As far as I can tell the mixing and engineering are the same and only the artwork and liner notes are any different. No bonus tracks or anything of the sort are offered – just the chance to get a disc that has been long out of print.

In recent years, Azaghal’s closest living relatives Horna and Behexen have (not successfully in my view) gone for a very pared-down sound – not very atmospheric and with the bass end turned to 2. It is interesting that this record could be a very early example of where this sound actually came from in the first place, and interesting that it is implemented better here than it was on the latest outings of either of those cousins. Harsh vocals, guitar turned up high in the mix, slightly tinny snare sound, staticky cymbals and nothing lower than mid tom or the higher bass lines. Bass drum almost inaudible. But Azaghal make this sound work as it channels all of the energy and power of the original performances through a very narrow opening, giving it a sense of blinding speed.

And this is a fast album. It has that kind of relentless blasting that sweeps the listener along. What is great about Azaghal, both then and now is that although their songs might be very similar in tone and feel, Azaghal manage to make each track distinctive and fresh. This is a harder task than one might imagine, given the relative simplicity of the Azaghal approach, but it speaks of their sophistication that they can pull it off.

This really is a must have for fans of the Finnish BM scene. Why Azaghal aren’t as well known or liked as their relatives is a mystery, but this disc is further evidence of their worth.