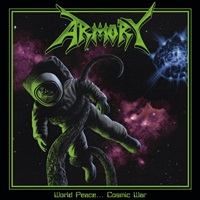 If you do a simple search on the Metal Archives website, you would notice that there is a Massachusetts power metal band called Armory that have been together since 2001 and released two albums under this moniker while still an active band. "World Peace…Cosmic War" on the other hand is the debut full-length for this Swedish act, also called Armory but more in the speed metal vein. They’ve been together for 5 years, which to me gives them little excuse for not picking a unique, different name. Digression aside, let’s investigate the offering on style and product alone.

An obvious affinity for quick hitting Iron Maiden licks amidst the speed riffs is relevant during "Cosmic War" and "Artificial Slavery", guitarists G. Sundlin and N. Ingelman injecting the right amount of melody and harmony through their interplay even when they choose to go at more of a breakneck, Agent Steel or Evil Invaders pacing. Acceleration on all facets appears to be part of the Armory game plan – although transitions often provide standout moments for the next speed vocal/riff/tempo barrage, check out "High Speed Death" in this regard. Bassist Jesper Lundin signals the start of "Phantom Warrior" in a Lemmy/Motörhead manner, the background gang vocals straight out of the 80’s school signaling audience call to action, as singer P. Andersson hits piercing shrieks during the end of the chorus.

Although most of the material is lean and mean, the closing effort "Space Marauders" at nine-minutes plus gives the band room to explore and breathe, opening with a beautiful guitar sequence while the mid-section contains some off-time progressive tempo antics that once again bring to mind classic Iron Maiden. Overall, this album has long-term appeal for the classic, traditional and speed metal fans who desire a lot of high energy songwriting and primal, raw production values.

CAGE OF CREATION – Into Nowhere