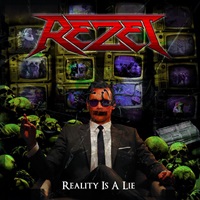 REZET – Reality Is a Lie

Perseverance is a good way to describe German thrash band Rezet and their career since their 2004 start. Recording five demos and an EP in those early years before releasing a debut album "Have Gun, Will Travel" in 2010, "Reality Is a Lie" is their third full-length, as ex-drummer Bastian Santen returns for his second go around and bassist Lucas Grümmert makes his first studio appearance since joining a couple of years back. Heads down riffing, steady moving tempos, and screechy yet speedy vocals are the main weapons the quartet employ, sure to make many a metalhead explosive and energetic when taking in these 12 tracks.

Early Metallica comes into the forefront when looking into a lot of the wah-wah enhanced lead breaks and circular riffing, burly and potent during "Madmen" and the militant follow up "Dying by the States" – the latter featuring some killer transitions that guitarist/vocalist Ricky Wagner and fellow axe slinger Thorben Schulz tackle like frontline soldiers plunging headlong into the shrapnel. Their Teutonic roots also come through especially in terms of Ricky’s range- abrasive and occasionally nasally, this aspect will keep Rezet true to the underground, but could be a possible deterrent to long-term appeal as some would prefer a more in key singer or slight more aggressive ("Cannibal’s Revenge" an example of his weaknesses during the verses especially).

Love the stop/start element to "Too Smart to Live", as well as the old speed/NWOBHM harmonies for "Fight for Your Life", as Rezet could easily slip back into 1983 through these two songs alone. The cover art is prototypical thrash (skulls and televisions surrounding the suit and tie guy with his mouth taped shut), the gang vocals encouraging more audience involvement and the hooks are ever present throughout. "Reality Is a Lie" succeeds in bringing another old school record to the metal masses.