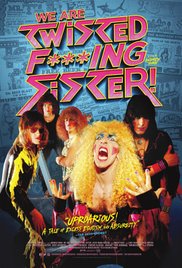 Remember a time when bands had to do the grunt work of building a following without hiding behind computers or phones? Where flyering, phone calls, face to face relationship building, and live shows mattered most. This is the essence of how Twisted Sister became international superstars – although many who look at their 80’s headlining heydays and think it was a quick rise to the top. This DVD documentary proves that not to be the case – as "We Are Twisted F**king Sister" is a 137-minute look into a band that would not quit, kept persevering, kept playing hours and hours a night and built up a fervent following in the Tri-State area (NY, CT, NJ for those not in the know).

Featuring interviews from the main members (Dee Snider, Jay Jay French, Eddie Ojeda, Mark Mendoza, A.J. Pero before he passed) as well as other early members prior to the band gaining a label deal, managers, promoters, and other bands, this is a chronological look at their mid-70’s to mid-80’s struggle to the top. The stories are legendary- you’ll discover how Motörhead helped the band win over less than enthusiastic fans at the Reading Festival in the UK, how they would end up performing for record executives numerous times with little to no results, developing their own arena style shows in small theaters as an unsigned act, as well as the decisions that caused Dee Snider to take over the songwriting responsibilities.

The multiple interviews along with real footage of the metamorphosis of the band aids the flow of the documentary. It’s not all rainbows and puppies and flowers and kittens when it comes to a music career – you’ll hear a lot of bitterness and anger as the band slugged its way to their Atlantic Records, only to find out the true meaning of playing with the big boys. This should be mandatory viewing for all heavy music musicians, as a lot of the work ethic and tenacity it takes to succeed applies even more so now than ever.