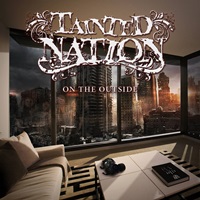 The second album from the international hard rock act Tainted Nation (as the members are spread out between the UK, Germany and Sweden), "On the Outside" gives the listener 13 tracks of modern hard rock with a definite commercial edge. They’ve studied a lot of American bands like Shinedown and Sixx A.M. for sure in terms of the crunchy guitar tone, punchy drum sound, and the professional, expansive vocal range of Pete Newdeck (who should be taking over for Paul Stanley when he steps down from Kiss).

Seasoned musicians like ex-The Poodles bassist Pontus Egberg and ex-Firewind drummer Mark Cross along with guitarists Ian Nash and Joel Peters keep their hooks front and center – delivering alternative melodies during the verses for "Live and Die" only to give us an arena rock worthy chorus. Flange axe effects give the down and dirty "Fight" bar anthem status, while "Karma" could be a worthy companion to "Kickstart My Heart" from Mötley Crüe. Ending the album with a darker emotional ballad "Back to Earth" that if given proper push could easily be a rock radio staple, the improvements from their "F.E.A.R" debut of 2013 are leaps and bounds.

Pete’s confidence and heightened sense of knowing where to accentuate verses and choruses with proper harmonies brings a lot of the material to chill-bump territory – and gives us songs that can stay with us for a lifetime. I’ll even forgive the slight misstep of tackling a classic Billy Squier song "The Stroke" by trying to heavy it up and losing a lot of the swagger and soul that made this a hit in the first place – because the Tainted Nation originals more than make up for this.

"On the Outside" is modern hard rock done with integrity. Bravo gentlemen.

AMONG THE PREY – Only for the Blinded Eyes