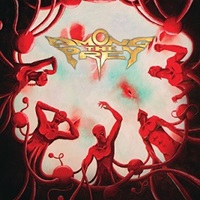 AMONG THE PREY – Only for the Blinded Eyes

Genre descriptions seem to be getting longer and more specific in the metal realm. 30 years ago, heavy metal or hard rock would be sufficient descriptions – then all of a sudden as thrash, death, power, and black metal mutated in their own directions, we now have so many distinctions that people want to be very concrete in what they are getting. For Finland’s Among the Prey, they do a lot of the work for you in their Facebook page as their debut album "Only for the Blinded Eyes" is a modern form of melodic death metal. Founded in 2013, drummer Atte Palokangas may be known to some people for his time in Before the Dawn as well as currently handling percussion duties for power metal act Thunderstone- while his bandmates include vocalist/guitarist Iiro Kuntsi, guitarist Joni Laine, and bassist Toni Keskinen.

Fortunately to these ears, the emphasis is leaning higher on the melodic death side and keeping the modern bounce and groove elements to a proper measure so as to not overcompensate for a lack of musical ability. This quartet know their way around their instruments, and can properly construct parts and transitions in a manner that makes every song distinctive. You can’t help but be swept away by the guitar harmonies throughout "In Your Face" and "Burning Down in Hell" that have been missing from pioneers like In Flames for quite a while – but at the same time there is this fierce vocal presence that is unmistakably modern in outlook with a sense of clarity that most of these acts forget. Occasional uses of computer stuttering effects on "Smile" veer into that nu-metal/metalcore territory, yet never diminishing the overall intensity and flow of the track.

Among The Prey has the most appeal with the teen to twenty-something generation, as their sound is very catchy, heavy, and geared to bolster audience throwdowns. This will be an interesting band to watch in the coming years.

GEHENNAH – Too Loud to Live, Too Drunk to Die