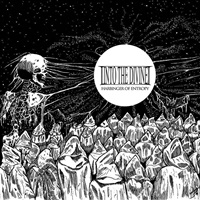 INTO THE DIVINE – Harbringer of Energy

Indianapolis, Indiana’s Into the Divine possess the right balance of musicianship and aggression in their new 6 song EP "Harbringer of Energy". Containing a dual clean/extreme vocal attack courtesy of guitarist Cole Chavez and bassist Wesley Holland respectively, expect a lot of whirlwind riff combinations and drop on a dime blast to groove tempo maneuvers, bringing to mind everything from Revocation to Necrophagist, along with twin guitar harmony elements that are in the In Flames/ Soilwork wheelhouse.

Cole and fellow guitarist Michael McGinley run roughshod over the necks of their fretboards, dizzying the airspace through their sick tapping and insanely quick finger picking on "A Threnody for the Abnegated". Evolving from a metalcore band to this shows dedication and time put into their instrumental abilities, a lot of the quieter drop offs during "Demons I Deceive" allowing Wesley’s bass proficiency to shine through, the keyboard parts adding more theatrical qualities to the melodies on hand. The semi-blast start from drummer Jay Burch on "Divine Slave" does sound a little out of place – or forced- depending on your viewpoint, but for the most part his duties from mid-tempo to speed and back again are outstanding.

The extreme vocals certainly have a little of that metalcore screech element that can put The Black Dahlia Murder comparisons up – while the clean work of Cole Chavez has a lot of Dan Swanö passion behind it. Technically sound, Into the Divine offer a lot of ideas in a tight 32 minutes – so here is another exciting release for those who love guitar chops in a death metal context.