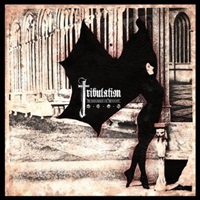 Sad to see, first off that Tribulation have finished their relationship with Irish label Invictus. A step forwards for the band perhaps, as no doubt the marketing machine of Century Media can offer more than one small independent label. Still…

It seems like every step taken by Tribulation in the last few years has seen them moving farther and farther from their Death Metal roots and closer to the expansive, progressive occult rock that comes to fruition on ‘The Children of the Night.’ Except for the DM vocals, no listener would ever guess where Tribulation had come from.

One thing that I felt about ‘Formulas of Death’ perseveres here: Tribulation are weaker than the sum of their parts. Once again, they seem to be doing all of those things I like – producing music that is cerebral and accomplished while exploring the limits of the genres that bore them. But once again, clever as they have been, Tribulation don’t wow me as much as I had expected and wanted to.

Yes, this latest platter has plenty of great moments, but also plenty of extended middle-eights and intros where my attention wanders. I love Tribulation’s confidence and willingness to try something new, and there is a lot to recommend this record. There are so many memorable riffs, clever progressions and so much originality. But once again I have started to lose attention. I am wandering… away…