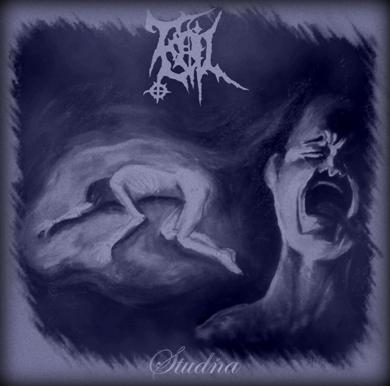 Evil is a black metal outfit hailing from Slovakia that has released so many demos and split EPs and the likes over the past 14-15 years that I am simply too lazy to list them all here, but the album entitled «Studňa» is only the second full-length assault so far. Not that it matters though, so let us just focus on the musical content of «Studňa». The allbum contains five tracks totaling 35 minutes of dark black metal.

Following a mellow introduction we are bombarded with aggressive and raw black metal that for some reason reminds me of a cross between the Norwegian band Iskald and the Ukrainian band Drudkh in the sense that quite a few of the fast and tremolo-picked riffs and melodies are somewhat epic and morose. Not that «Studňa» is folky as such, but it has a sense of longing and melancholy to it that is quite prevalent in places, which is underlined not only by the bombastic parts, but also the calm and acoustic parts that are scattered throughout. The album is varied and interesting in places, but I would hardly deem it a must-buy or downright essential listening if you catch my drift. Solid and decent for sure, and the production is quite good, but it can hardly be called innovative or original and as such there are better albums out there that are similar to it. However, if epic black metal is your thing then you might want to check «Studňa» out.