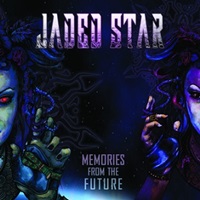 Sometimes hanging one’s hat on former band activities doesn’t tell the whole story. Ex-Iced Earth drummer Raphael Saini for instance was only in the band for one year- appearing on their last studio album Plagues of Babylon – while ex-Visions of Atlantis vocalist Maxi Nil spent 2009-2013 in that Austrian symphonic/melodic power metal act. Rounding out the quartet is guitarist Kosta Vreto and bassist/ synth player Babis Nikou – but can the Greek metal band Jaded Star on their debut album "Memories from the Future" be worthy of your attention and money?

Based on my exposure through this 10 song, 45 minute album, the foursome prefer to explore a lot of commercial aspects of the genre at stake – holding in high regard Maxi’s obvious vocal abilities and natural supplementary musical context. Early Lacuna Coil and maybe the commercial side of say Firewind, Evergrey, and Alter Bridge come in entwined depending on the needs of the individual song. "Healing the Inner Child" for instance features superior layered vocal harmonies as Maxi pushes her upper range through the bridge and chorus, while the riffing also builds to a commercial crescendo, the modern stair-step moments adding to the groove/swing factor of the arrangement. Raphael’s steady power groove and Babis’ complementary keyboard work makes opener "The Mask" an easy opener to understand, hooks galore to hang your hat on.

The album does move about some solid symphonic/modern terrain as well, especially "Keep on Fighting" where Kosta’s echoing guitar refrain underpins Maxi’s emotional delivery. Mixed and mastered under the watchful eye of Fredrik Nordström (Dream Evil), Jaded Star is not necessarily going to be considered the most original band to perform in this style – but their brand of Euro melodic modern metal has an intense quality that can’t be denied. One to possibly watch as I’m sure Jaded Star will be making a buzz on the live circuit, these tracks ready made for stage consumption.