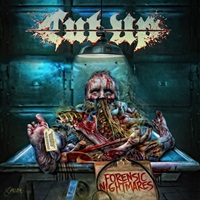 When Sweden’s Vomitory retired in 2013, people wondered if any of the musicians would move forward in other bands. Cut Up is your answer, at least in terms of the ex-rhythm section bassist Erik Rundqvist and drummer Tobias Gustafsson – recruiting Fetus Stench guitarist/ vocalist Andreas Björnson and ex-Coldworker guitarist Anders Bertilsson to fill out the lineup. "Forensic Nightmares" is their 11 song debut album – and if pure, to the bones death metal is your ideal format, Cut Up slice and dice to content.

Always groovy while never forsaking the heaviness factor, the band fluctuate between mid-tempo efforts like "Remember the Flesh" and "Order of the Chainsaw" and the more fast and furious numbers that should allow plenty of crowd swarming such as "Enter Hell" and "Camouflesh". Yes it’s in the same mold as early Swedish death metal, the growls are evil but the phrasing and wording understandable – the focus on getting to the crux of the hooks early and lobbing out the riffing changes in a smart fashion, as everything has to have a purpose and make sense.

There’s just something about that fuzzed out, lower bass sound, raw drums, and thick axe attack that gives Cut Up the kick necessary to obliterate and maintain cohesion without going off the rails. Awesome song titles like "Brain Cell Holocaust" and "Dead and Impaled", the right blasting mechanisms in moderation plus the proper sequencing as to not exhaust the listener makes "Forensic Nightmares" one of the best death metal records of 2015. When you tire of your old Dismember, Entombed, and Grave albums and need something newer to bring to the table, consider Cut Up for this slot in your collection.