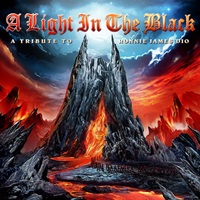 12 bands on the Massacre Records roster pay tribute to the mighty singer Ronnie James Dio, who five years ago tragically passed away due to stomach cancer. This is a double album of 20 songs spanning his time in Rainbow, Black Sabbath, as well as his solo career – and a mixture of bands from the more traditional/power acts like MessengeR, Rebellion, Circle of Silence, and Wizard to a heavier band like Burden of Grief.

Standards like MessengeR and Rebellion doing "Kill the King" plus Crystal Ball taking on "The Sign of the Southern Cross" are offset by left field choices – Circle of Silence picking "One Night in the City" plus "Time Machine", Wizard closing disc two with "Caught in the Act", and Iron Fate digging into "Rainbow Rising" for "A Light in the Black". I don’t think any Dio tribute could surprise the Century Media double disc of years back that included Blind Guardian, Fates Warning, Gamma Ray, Hammerfall, and Jag Panzer among others – so go into this knowing that the bands on hand are deep supporters of the man’s legacy and entire catalog.

95 minutes of incredible music, the man’s importance on heavy metal will never be lost – "A Light in the Black" could help these bands gain more newcomers to the fold, and hopefully fans will view this in the correct light. Highlights include "Stand Up and Shout" from Love.Might.Kill, Iron Fate with the aforementioned "A Light in the Black", and Gloryful handling "Holy Diver". Throw the horns my friend, look to the sky, and fly with Ronnie again.