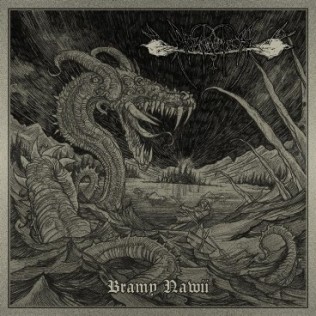 Abusiveness is a Polish black metal band with pagan undertones to it that performs aggressive, violent, and at times chaotic music somewhat akin to bands such as Marduk, Enthroned, and Blaze of Perdition just to name a few. The band has actually existed since 1991 and released a whole slew of demos, singles, splits, and the likes. However, «Bramy Nawii» is the band’s fourth full-length assault and contains 7 intense and atmospheric songs that are actually quite dynamic and varied in their own twisted ways. While the band does indeed perform furious and hard-hitting black metal, there are lots of epic parts to be found as well, not to mention a few calm and mellow parts, some of which are performed by means of acoustic guitars. A lot of the riffs are razor-sharp and somewhat dissonant at times, thus they may be said to lean toward death metal in a sense. The vocals are quite varied while the drumming is excellent. The ambient-like soundscapes are also quite well-constructed. These guys clearly know how to handle their instruments properly and compose catchy and interesting tunes. I like the production as well in that the record sounds neither too raw nor too polished, which is to say that the whole thing sounds quite balanced and organic. «Bramy Nawii» is definitely one of the best Polish black metal releases that I have listened to for some time. This is quality black (pagan) metal, you fucks!