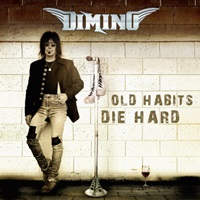 Former Angel frontman Frank Dimino returns to the scene with his first solo album "Old Habits Die Hard" – and it’s packed to the hilt with 11 catchy melodic hard rock numbers. Supplementary support comes in the form of organist Justin Avery, drummer John Miceli, bassists Paul Crook and Danny Miranda, plus a host of guitarists including Oz Fox, Punky Meadows, Eddie Ojeda, and Rickey Medlocke amongst the 8 axe masters that appear on this release.

The key to success in this field is the right compositions and delivering the best performances out of the set of musicians you have to give the listener an all-encompassing final product. From the larger than life 70’s throwback semi-ballad "I Can’t Stop Loving You" with its Zeppelin-esque guitar base working side by side with Frank’s bluesy register to the hard charging "Mad as Hell" or anthem opener "Never Again", you can tell that Dimino is aiming to keep the sonic outlook active while not forsaking his early hard rock roots. There’s still a little bit of that bombast in certain endings, Justin’s organ parts are as important as the electric guitars (check out "Rockin in the City" and the commercial-oriented "Sweet Sensation"), and most of the choruses are very primitive but so catchy, just as you hope for in this genre.

This is an ideal record for those who like the catalog of Riot and UFO as examples- along with Frank’s stellar vocal performance, as he surely proves that his pipes are no worse for wear on "The Quest" or the cowbell enhanced "The Rains About to Fall". A long time coming, hopefully this is the start of a second run in the business, as "Old Habits Die Hard" is prime time melodic hard rock that not only fans of Angel will love, but probably a decent amount of newcomers.