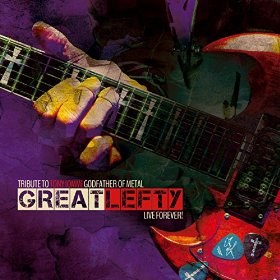 «Great Lefty: Live Forever!» is a 2-disc tribute to the legendary riffmeister and the father of all that is good and brilliant, namely Black Sabbath guitarist Tony Iommi. If it was not for Iommi I would not be writing these words now, and I dare say that you would not be reading about this album either. In other words, Iommi is the godfather of heavy metal and that is just the way it is!

Tribute albums are usually pretty lame and boring to listen to, which is to say that most of them only ever succeed in making me dig out the originals afterwards so that I can listen to those instead. However, «Great Lefty: Live Forever!» falls into a different category, one reason being that some of the great bands and artists on this album have chosen to cover brilliant compositions such as «Never Say Die», «The Law Maker», «No Stranger to Love», and «Scarlet Pimpernel». Usually you only get the most well-known songs dating from the Ozzy-era, so when looking over the tracklist for this album I was pleasantly surprised. Also, former members of Sabbath, namely Vinny Appice and Tony Martin, are featured, which is very cool. Appice performs «Heaven and Hell» with Kyle Cousins while Tony Martin sings the underrated classic «Anno Mundi (The Vision)» with Giuntini. Great stuff!  Actually, «Anno Mundi (The Vision)» is definitely one of the very highlights of this album. Tony Martin was, is, and always will be one of the very best vocalists of all time. Fuck the naysayers and disbelievers! «Never Say Die» by Dario Mollo and Mark Boals also rules. The version of «Heaven and Hell» is also very good, thanks in large part to Vinny Appice’s inhumanly heavy drumming. The extended version of «Scarlet Pimpernel» by Mario Parga is brilliant, and the same thing could be said for «Behind the Wall of Sleep» by Phil Jakes. I also like the versions of «Paranoid» and «You Won’t Change Me» quite a lot.

Not all songs are good, though. «Time is Mine» is a brilliant song originally, but Maniac Rise pretty much suck at playing it. «Electric Funeral» by Iron Lung feat. Wizard of Ozz is also pretty lame while «I» by Black Sabbath Dio Tribute Cz is a little too anonymous for my taste. «Hole in the Sky» is downright horrible due to the vocals, so steer clear of that one.

In the overall perspective, «Great Lefty: Live Forever!» is one of the better tribute albums I have had the pleasure of listening to, and the majority of tracks are quite good (and some are even phenomenal). Given that we are dealing with 20 tracks here, it should not really come as a surprise that a few of them are not really that good. As I stated earlier on, this is way better than most tributes out there. Hats off to Tanzan Music for putting this together.

On a final note, the info sheet that came with the promo states that «The profits from compilation sales will be destined to Macmillan Cancer Support UK», which is very cool in my opinion. Check this 20-track tribute out if you love Iommi and Sabbath.