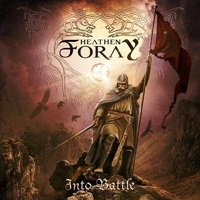 Pagan metal, melodic Viking metal – label it however you might, leaders like Amon Amarth and Ensiferum have taken the genre to bigger heights through their consistent discography and live performances. Austria’s Heathen Foray play a similar brand of battle metal on their fourth album – appropriately titled "Into Battle". A mixture of English and German sung tracks, the nine cuts vary from guitar harmonic offerings that are more power metal like "Fight" and "Unthinking" to mid-tempo anthems like "Tir na nOg" and "Knüppeltroll" that are surely mead hall tested – as well as a few heavier offerings, and a closing acoustic "Winterking" hidden songs.

There are leaders, and then there are bands who possess ability but are unfortunately lacking the necessary creativity or originality to lag behind. Heathen Foray are in the latter category due to their lackluster vocals from Robert Scholl as well as predictable riffing and similar tempos as the bands they aspire to be on par or eclipse. The rapid fire guitar/vocal sequence in "Freundschaft" between the monotone gruff vocals and guitar progression will make many laugh, and not in a good way.

This deep into their career (11 years), Heathen Foray are going to have to squeeze out a little more of that well if they hope to climb the ranks. Being a carbon copy of your main influences isn’t going to gain much beyond a cult following – and probably not a healthy enough one to make a living at your craft.