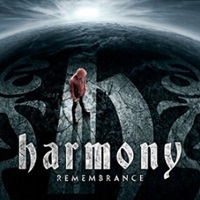 An interesting stop-gap release here for Sweden progressive/power metal act Harmony here with "Remembrance". This 6 song EP consists of 4 re-recorded songs from their 2003 "Dreaming Awake" debut album, along with 2 new songs. Normally I would question the need for re-recording… but when you have ex-Lost Horizon vocalist Daniel Heiman as your session singer, why not shoot for the stars as he certainly is in the upper echelon of the power/progressive metal world.

"Eternity" is a standard Euro-oriented power metal offering that has a lot of neo-classical twists and Helloween/Edguy riff aspects, the deep keyboard ending and Heiman’s rising upper range makes this an instant winner. Markus Sigfridsson employ an interesting exquisite acoustic guitar break and the symphonic/ cinematic keyboards from John Svensson make "Dreaming Awake" a progressive, semi-epic highlight. When it comes to the two new songs, "In His Heart" to my ears has a little more of a commercial sheen in terms of the keyboard hook and simplified main chord progressions, allowing the vocal harmonies and Heiman’s stellar phrasing/ range to steal the show once again- while "Feed My Hunger" straddles the neo-classical meets melodic metal styles.

Over 33 minutes of music here, "Remembrance" can be a reflective record for the band’s history and hopefully a reminder that Harmony are a killer melodic metal act that throw down a lot of different neo-classical, power, and progressive elements to their songwriting. Let’s hope the next full-length keeps the quality on par, and not as long of a six year gap as the previous two albums.