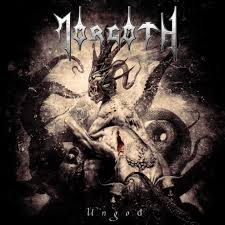 The first album without Marc Grewe on vocals for Morgoth could be a tenuous sell for the stalwarts, because this German band has been through its share of highs ("Cursed" and "Odium" particular early 90’s death metal favorites of mine) and downs ("Feel Sorry for the Fanatic" and its industrial vibe didn’t sit well with many). "Ungod" features Disbelief singer Karsten Jäger, and his low yet intriguing growls sit between John Tardy and Chuck S. of Death, working intriguing well with the swirling mid-tempo riffs for "Snakestate" and rhythmically enticing "Traitor".

Guitarists Harald Busse and Sebastian Swart often lock onto an addictive, doom-oriented chord sequence and allow the rhythm section of bassist Sotirios Kelekidis and drummer Marc Reign to groove in a solid yet progressive manner – check out the five minute closing instrumental "The Dark Sleep" or speedier "Decent into Hell" for their twin axe importance to churn out that wall of sound to crush. Overall I feel that Morgoth are moving in the right direction as a quintet- willing to add doomier/ darker chord segments to build tension and excitement into the arrangements – the 6:13 title track a prime example, as Marc’s cymbal accents and steady double bass hits go hand in hand with the riff swirl that penetrates the air space.

In the end, it will be up to the fans to decide if they are willing to give Morgoth another chance given the stylistic shifts they’ve thrown at them. To judge on its own merits, "Ungod" is a solid slab of doom-oriented death metal that has more in common with the early development of the band, so hopefully the new incarnation of Morgoth continues to make steady progress on the live front as there’s something worthwhile to continually explore here.