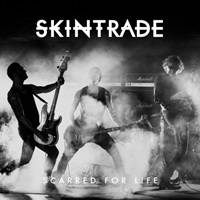 Quickly hitting back with their fourth studio record following the more than adequate "Refueled" comeback of last year, Sweden’s Skintrade consistently deliver in the melodic hard rock genre – and "Scarred for Life" is no different. These 10 songs are infectious, energetic, and bubbling from a bluesy perspective while the vocal harmonies and delivery out of Matti Alfonzetti remains top class, molding the best of David Coverdale and Eric Martin in shimmering grace and gritty textures.

You can expect certain songs to have a cross between the 80’s Sunset Strip scene and a little bit of the 90’s modern rock edge that made Stone Temple Pilots or Collective Soul standards on North American radio like "Storm Will Come" and "Goodbye", especially in terms of the guitar tone Alfonzetti and fellow Skintrade guitarist Stefan Bergström choose to employ. At other times the band choose to go for more of a simplified, stripped down groove arrangement, which for the case of "Lay With Me" emphasizes the entertaining musical interplay between guitarists and rhythm section, and allow Matti a chance to dig deeper into his natural bluesy, playful melodic register. Occasionally throwback elements come into play, the main riff for "Leave a Scar" has a bit of Aerosmith meets Ratt going on, while Skintrade also tackle a left field cover with Katy Perry’s "Wide Awake" that works- much more hard rock oriented while the spacey elements are given a heavier, guitar fused charge up.

These are bountiful times if you are a melodic hard rock fan- and Scandinavia seems to be hitting pay dirt when it comes to exemplary songwriting and performances while understanding the need for memorable hooks, melodies, and choruses. Skintrade with their second go around aren’t living on nostalgia – and "Scarred for Life" proves their desire to keep the genre potent and worthwhile in current times.