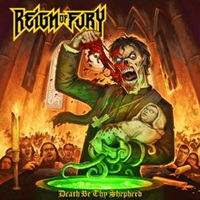 REIGN OF FURY – Death Be Thy Shepherd

After a struggle for respect in the 1990’s, thrash is not underground anymore – this latest resurgence has moved veterans to small theater headlining status and gaining reasonably top billing at major festivals. Reign of Fury since 2006 has been another contender to supply a steady dose of melodic thrash, and on album number two "Death Be Thy Shepherd" tiptoe between modern production values and old school ethics to deliver an 8 song, hour long record.

Expect longer song structures of the 6-7 minute variety, bookended by the 9:22 opener "Faustian Mastery" and the 10:27 closing title track. Their sound is a mix of old Metallica, Heathen, and a touch of Metal Church to these ears – with plenty to latch onto from a guitar perspective as far as doubled up rhythms, melodic transitions, and all out crunch assault. Occasionally the vocals and mid-tempo riffs veer into Anthrax territory, but more of the John Bush-era as "Hypnotise the Masses" brought me back to the "Sound of White Noise" days.

Can’t really understand the death growls on the bridge of "Gates of Sanity" – while used for dynamic diversity, they are unnecessary when the instrumental play and main members can certainly carry the tunes just fine. "All Is Lost" is one of those dramatic introspective ballads that gives vocalist Bison Steed and guitarists Jon Priestly/ Ed Fury a chance to flex their range and skill sets – much like the best Metallica or Metal Church material from the 80’s, as the triplet gallop change during the half way point jacks the emotional intensity up a hundredfold.

Many will question the band’s tendency to elaborate on certain instrumental sections – and I do think that sometimes, brevity would increase the focus of a particular arrangement. As an example, the subtle volume increase intro to "The Love of a Dying God" could have been shortened, as the first vocal doesn’t appear until the 2:04 mark, but the gang background vocals remind me of classic Exodus. Overall though, the pluses outweighs the weaknesses, and as such "Death Be Thy Shepherd" has that distinct musicality that could make a mark with many thrash fans.