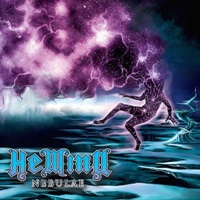 The follow up to the excellent 2012 debut "Synthetic", Australian progressive metal act Hemina has a lot to live up to as right out of the gate that record impressed in terms of harmonies, dynamics, and mood modulation. "Nebulae" continues that versatility – in terms of dual male/female vocals, a boatload of harmonic possibilities, and the art of individual songwriting at hand, much like the best in the business from Pain of Salvation to their own domestic pioneers Voyager.

The band has a tendency to incorporate a little bit of a semi-gallop to some of their chord choices and rhythms – making songs such as "Freedom" and "Loss" easy to get into, due to the contrast at times between the airy melodies and heavier, slightly down-tuned guitar tones. Keyboardist Phillip Eltakchi performs in more of a Genesis/ Yes manner rather than trying to paint a neo-classical arpeggio montage, which improves the impact of the twin guitar parts and epic tendencies of some of the longer arrangements. Douglas Skene hits some tower notes on "Nightlives", but doesn’t overextend the welcome – he would rather be more mysterious and use his wide open mid-range to express the lyrics. The 10 tracks all contain one word titles – probably expressing different emotions and philosophic nuances to the material.

I don’t even mind the occasional djent aspects during "Lust" or "Strength", because once again Hemina incorporate everything from new wave to alternative aspects that make their brand of progressive metal so special, so unique, and very engaging to return to hundreds of times. The 11 minute closer "Otherworldly" conveys respect for the genre at hand: organs from the 70’s, melodies from a bygone era, tranquil passages with quiet vocals and acoustic guitars as well as furious, time signature manipulation with electricity and vibrancy.

The land down under wins again – and the progressive metal followers benefit the most. "Nebulae" gives us another hour of Hemina’s high caliber style, and I for one can’t wait to see what they will cook up next.

EPITAPH – Crawling Out of the Crypt