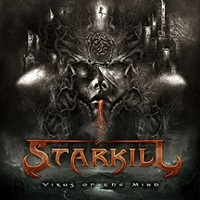 The second album from Illinois’ symphonic/ melodic black/death metal band Starkill is "Virus of the Mind" – a more mature offering where the quartet temper their early adrenaline raced, virtuoso tendencies with some new found semblance of power and songwriting force. Songs like "Be Dead or Die" and "Skyward" prove that if Starkill wants longevity in this business, connecting on a hook/melody level is key no matter what speed, and give the listener a little bit more dynamic variety to return to this record consistently.

"Before Hope Fades" even has commercial potential, containing one of those comforting gothic outlooks that would have been going down a storm with Paradise Lost or Sentenced fans, guitarist/keyboardist Parker Jameson using more of his clean voice to mirror the mid-tempo arrangement in a semi-cyber, space oriented trance. For those that love the speed or virtuoso accented numbers, the blackened blast-heavy "Into Destiny" or "My Catharsis" will certainly meet approval for ardent fans of the genre – especially the blitzkrieg runs that bring out the air guitarist in everyone.

If you haven’t heard Starkill before, it’s like a power metal version of Children of Bodom, Wintersun, and Skyfire all rolling into each other – balancing out the orchestration while still remembering that this is a metal act first and foremost. Their sound covers a broad enough spectrum that should factor into future long-range career goals – as the band can tour with symphonic, power, and a range of death/black oriented acts.

"Virus of the Mind" – potent songs gravitating towards establishing a niche in the genre, the future looks very bright for Starkill if they keep making amazing records like this.